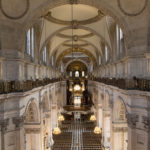 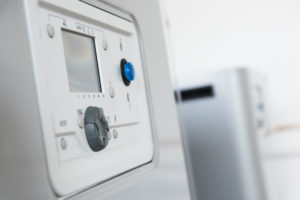 One of the many responsibilities of local authorities is keeping public buildings warm. With limited budgets, it is vital to be as cost effective as possible when it comes to designing and running a heating system.

The way this is approached can have a significant impact on the energy-saving potential. Not only the choice of heating equipment including setup, matters, but also, looking at such details as room height and building occupancy. Making use of built-in boiler controls and ancillaries such as temperature sensors to feed information back to them offers an integrated approach to heating efficiency, reduces energy wastage and hence costs and carbon emissions.

‘One size doesn’t fit all’ approach to heating areas
When planning a heating system, specifiers should consider what each part of a building is used for. One of the reasons for this is that heat is also generated by a range of appliances (IT equipment, lighting, fridges), humans and solar gain (especially problematic where glass panels are present). As a result, the actual heating requirements can be lower. Other spaces, such as hallways, are only used intermittently and do not need constant heating.

Accordingly, it is essential to divide a building into different heating zones to avoid underheating one or overheating other areas. This could e.g. be a mixed-use building with function rooms on the ground floor that are only occasionally used and council offices upstairs. While the former would require only ‘ad-hoc’ heating, the latter would constantly rely on it during normal office hours.

With controllers installed on both floors, both heating zones can be run independently with different start times and temperatures. This effectively minimises energy requirements and reduces costs to warm the building. Heat is provided when it is needed, where it is needed, and at the right intensity.

How to track free contributions?
Internal space temperature sensors measure the air temperature and do not only monitor the performance of the heat generators and the various heating circuits but can also react to changes in temperature that result from appliances, people or solar gain. The sensors should be positioned in carefully selected locations away from direct sunlight or other heat sources to avoid affecting measurements and hence giving an inaccurate picture of the actual room temperature.

Building layout and design as influencing factor
Several factors have an impact on efficient boiler control setup. For one, how quickly a space responds to heat, the thermal inertia of the building, needs to be considered. In places with large volumes of air, such as in a civic hall with high ceilings, high thermal inertia will increase the needed heat up time dramatically. This is made worse by poor heat distribution, unless suitable equipment to solve this issue is installed. Therefore, it is vital to calculate an adequate time to switch on the boilers to ensure the space has reached a comfortable temperature by the time of use. On the other hand, an early switch off before building users leave can help to achieve crucial energy savings. Modern controls will self-learn this when set up correctly, although fine tuning is still necessary and recommended throughout the first year of occupation.

Another factor to be considered is heat loss. It occurs on surfaces which make up the building envelope, separating a building from the outside (such as walls, floors, roof, windows etc.), but also from gaps in it where cold air can come through. These effects can be felt especially in the winter months with low temperature and winds. That’s why monitoring the external temperature at any given time to estimate the heat loss from the building is necessary. 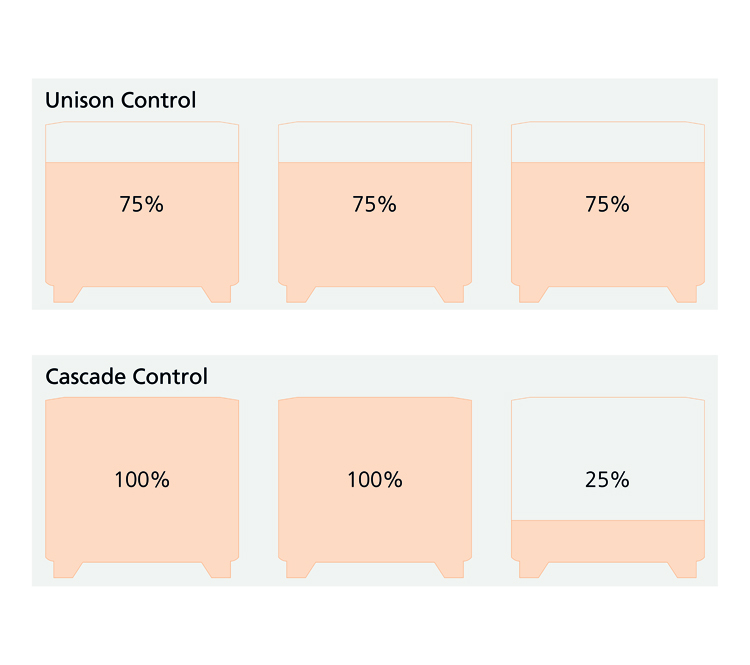 Several boilers can deliver the same amount of heat operating in a more efficient mode (low fire) together rather than only one providing all the heat at a higher, less efficient modulation. Benefits of this strategy include energy and cost savings, even use across the installation and extended lifetime of the products by avoiding over- and underuse of individual boilers, as well as the availability of a backup during service or breakdown. While one boiler is out of use, others can step in to cover the heat demand without interrupting the heat supply.

In multiple boiler arrangements, the boilers can be set to operate in different modes using the built-in boiler controls. In unison control, the controller attempts to hold as many boiler modules firing at the same time to match the base load of the building. The aim of this setting is to have them all modulate to more efficient low fire together. In cascade control, the controller attempts to match the base load with as few boiler modules as possible. Each method has its own merits dependent on the hydraulic configuration local to the boilers.

Looking beyond the boiler
To make the best use of modern technology, the heating system should be looked at as a whole. Efficiencies can be improved by using advanced boiler controls, sensors, mapping out high/low use areas of a building, and considering heat up time. With the use of multiple boilers in combination with built-in controls, further energy savings can be achieved. This benefits not only carbon emissions and energy costs but can also extend the reliability and lifetime of a system.