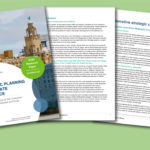 The Royal Town Planning Institute (RTPI) has published a report on best practice for strategic planning for climate resilience across city regions.

Research was undertaken by RTPI staff working with the Liverpool City Region and constituent councils during 2019 and incorporates studies of good practice by planning schools at the Universities of Liverpool and Manchester.

It is hoped the analysis and evidence-base put together as part of the work will help combined authorities and other strategic planning bodies think more holistically about climate resilience and prompt them to consider climate vulnerability and risk, beyond flooding, in their plans.

Head of Policy Practice and Research at the RTPI, Richard Blyth, said: “The climate emergency has not gone away. Planning must address it full on. A strategic approach is critical for this and many other 21st Century challenges. We were pleased to work with the City Region on this useful project.”

The report’s main findings include:

The report comes as the Mayor of Liverpool City Region this week launched the second stage of his ‘Our Places’ consultation, which will help form the blueprint for the city region’s approach to planning and development.

Responses to the consultation, the first stage of which was launched in October 2019, will influence the Authority’s first Spatial Development Strategy (SDS), which will set out a strategic framework for the development and use of land moving forward for at least 15 years.

When complete it is thought the SDS will be the first in the country outside of London.