Housing providers across the UK are seeking ways to help people live at home for longer. An ageing population is the primary concern, with nearly 12 million people aged 65 and above in the UK and the number of centenarians increasing 85% in the past 15 years (source: ONS (2018)).

The impact of inadequate housing is felt widely. ‘The costs of poor housing to the NHS is estimated to be £1.4bn per annum; of which nearly half (£624m) is attributed to poor housing among older adults,’ (House of Commons, 2018).

There are some local authorities with active housing plans which may go some way to ease the problem — providing modern, future-proof homes but in the main, adaptation remains the one and only solution for helping people to live at home, whatever their age or ability.

Embracing adaptation
Leeds City Council is a provider which embraces adaptation for its residents. Working with its social care team it helps those who have difficulty getting around the home due to a physical disability, sensory impairment or old age by making changes to their property, making it suitable for their needs and to help them live at home independently.

The council currently provides mobility adaptations to around 2,500 properties, including the installation of home lifts (through the floor lifts), external step lifts, stair lifts and patient hoists. The type of adaptation is dependent on individual requirements.

Last year, expert lift manufacturer Terry Lifts secured a four-year framework agreement with Leeds City Council to supply specialist lifts for eligible residents. This is the second time that the Knutsford-based business has won the specialist lifts lot of the ‘housing & non-housing framework’.

Terry Lifts was selected for its quality products and competitive rates. Fire protection also played an important role in the selection process. 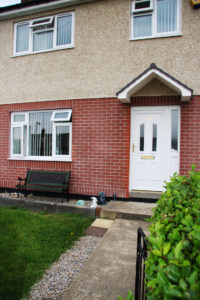 A through the floor lift, for example, requires an opening to be created for the lift to pass through when travelling from floor to floor. This instantly breaks the fire integrity and removes the fire protection of the first-floor structure — potentially enabling a fire to move freely between floors.

To minimise risk, it is vital that an independently certificated through the floor lift is selected and installed, one which complies with BS 5900:2012 (Powered home lifts with partially enclosed carriers and no lift way enclosures) and is independently tested by an approved Notified Body.

In harmony
A recent installation, carried out on behalf of Leeds City Council, saw Terry Lifts fit its Harmony lift into the home of the Cummings family, giving easy and safe access to the first floor. In line with the framework criteria, the Harmony home lift is compliant to BS 5900:2012 — maintaining 30-minute fire and smoke integrity between floors, whether it is parked upstairs or downstairs. Smoke or heat alarms ensure the lift performs correctly in case of activation.

The Harmony can be fitted almost anywhere in the home. The Cummings’ home lift was installed between the kitchen on the ground floor and a first-floor bedroom, for example. The lift requires minimal headroom on the first floor and can be installed against non-loading bearing walls. No lift shaft is required so it can be installed quickly with no mess or fuss.

Speaking about the Terry Lifts installation process, Chris continued: “Most of the work is carried out with minimum disruption to the residents. On the odd occasion we would arrange for temporary respite for those who would be affected by the work.”

Aside from lift supply and installation, Terry Lifts also provides Leeds City Council with a recycling service. Once an adaptation is no longer required, Terry Lifts decommission the lift and return it to the factory in Cheshire. The product is then fully refurbished and prepared for reinstallation into another suitable property. “This exercise saves Leeds City Council money which can then be used to fund any ongoing or future adaptations,” said Chris.

“Terry Lifts continue to provide excellent service to Leeds City Council. All installations are dealt with in a professional manner from the initial enquiry through to the end user. All work is completed to a very high standard and within an acceptable timeframe.”