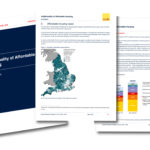 Government won’t achieve new homes target by relying on private sales alone according to the latest research into affordable housing by Savills.

The new report produced by Savills – Additionality of Affordable Housing – is co-sponsored by the National Housing Federation; the G15 group of London’s biggest housing associations; and Homes for the North, an alliance of 17 of the largest developing housing associations in the North. The research considers the UK’s housing shortfall and investment in affordable housing.

In the report, Savills illustrates how a slowing private market, tapering of the Help to Buy scheme and a potential Brexit downturn, is contributing to a deepening housing shortfall. Directly funding housing associations will be critical to closing this gap and delivering more affordable homes, the research reveals.

The report considers the current affordable housing supply, taking into account affordable housing completions, as well new homes delivery through Section 106 and grant funding. Estimates by Savills suggest that 100,000 new homes per year need to be priced at sub-market levels, and figures from The Herriot Watt University, published last year, say that to meet the shortfall in affordable homes, 145,000 new houses need to be built annually. It is important to consider the wider socio-economic reasons why households are unable to access a suitable home at market rent. The report says, ‘these wider reasons contribute to the 1.1 million households who were on local authority waiting lists in England in April 2018’.

The report points to a wider role for housing ‘in economic rebalancing and social regeneration’.

Savills analysis published last October indicates that annual housing supply will rise from around 220,000 to 260,000 homes in 2021, assuming:
• 6% growth per annum from larger and medium sized housebuilders, including expansion of the number of housebuilders in each category, as builders expand.
• 10% growth per annum from small housebuilders, as the availability of finance and land opportunities grow.
• Housing associations expanding from 35,000 to 50,000 homes per annum, in line with stated plans.
• Built to Rent increasing its rapid expansion, going from 7,000 to 15,000 per annum, noting that much of this will support continued expansion of output by housebuilders and housing associations, so is partially included within the other assumptions.
• Local authorities increasing development to 5,000 homes, making use of new borrowing capacity within HRA.
• Other completions, primarily those via Permitted Development Rights, falling from 34,000 to 20,000 per annum. 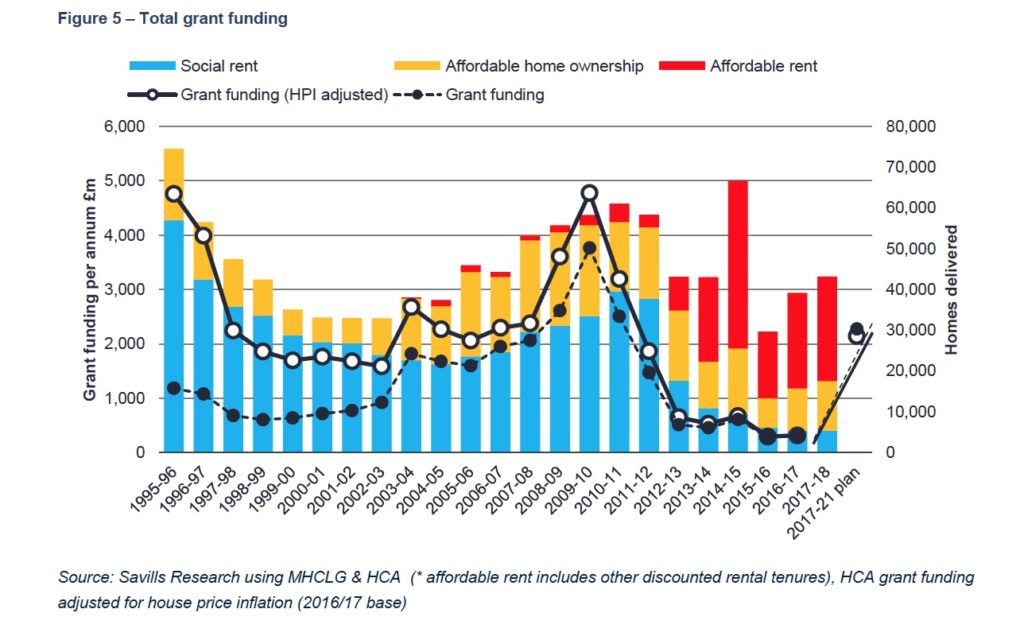 Grant funding
One of the key findings in the report is that in order to reach the Government’s target of building 300,000 new homes a year in England by the mid 2020s, there needs to be an expansion of affordable housing supply and this will require additional grant funding.

The research found that increased government funding for affordable housing – which has fallen dramatically from 50% of the cost of building a home before the financial crash to just 12% today — will add to, and not displace, existing investment from the private sector. The report findings come as growth of the big nine private housebuilders — who are currently responsible for some 40% of new completions – continues to slow.

The report also calls for more joint ventures between the private sector, councils and housing associations, and increased use of long-term funding models such as the strategic partnerships rolled out by Homes England and the GLA to help ensure new funding adds to overall delivery.

Paul Hackett, Chair of the G15 and Chief Executive of Optivo, said: “Our sector is reliant on a cross-subsidy model where the money we make from private housebuilding is reinvested into affordable homes. But this model is at full stretch and massively exposed to the market. Savills’ report shows that a new funding deal for affordable housing is now imperative if the Government wants to hit its housing targets over the next decade.”

Kate Henderson, Chief Executive of the National Housing Federation, commented: “This research shows that relying on private developers to end the housing crisis is fatally flawed. Without Government investment in affordable housing, it just won’t be possible to build enough homes to ensure that everyone can have somewhere stable and affordable to live. If we are serious about ending the housing crisis, the Government must do the right thing and invest in affordable housing at the upcoming spending review. Doing nothing is simply not an option.”

Carol Matthews, Chair of Homes for the North and Chief Executive of Riverside, added: “This has been an important piece of work for Homes for the North to collaborate with key partners on to show that the North, together with all regions, has a pivotal role to play in building the 300,000 homes needed each year. As the report finds, volume housebuilders’ rate of delivery is predicted to slow further in the coming years. Housing associations stand ready to fill this gap by working with the Government to grow our development pipelines and make our contribution to tackling the housing crisis.”

Emily Williams, Associate Director for Residential Research at Savills, said: “Increased grant funding would widen the range of tenures being built, accelerating the speed of market absorption and therefore the build out of sites.”

For a copy of the Additionality of Affordable Homes report, click here.

0 0 0 0
Previous : How to beat stress and keep the mind healthy
Next : Council homebuilding in London reaches highest level in 34 years
Tweets by LABMmag