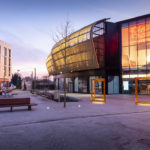 LABM finds out why housing and regeneration go hand in hand to the drum of a civic heartbeat in Ashford, Kent.

The success of any regeneration project hangs on several key elements slotting together like jigsaw pieces. The whole is greater than the individual elements making the picture, but, without those elements joining up, there is little chance of success. When people think of regeneration their mind can focus on one area, such as the revitalisation of the High Street. However, pulling the numerous strands together to form a holistic picture of regeneration means councils must adopt the true essences of regeneration as part of its grand plan. In 2014, Ashford Borough Council had a vision and developed a plan that would positively affect all aspects of living and working in the borough.

Eight major projects, known unsurprisingly as ‘the Big 8’, began to transform Ashford and reposition the town as a revitalised hub. With the ability to fit 14 of London’s 32 boroughs into it and still have room, Ashford Borough Council knew it not only had potential and room for growth, but, with direct and high speed trains (London in 38 minutes and Europe from Ashford International Station), that its ambitions should not be resigned to that of a parochial borough town lost in the heart of Kent.

Each of the eight projects covered various aspects that were critical to Ashford’s ambitions to grow. Heading the key areas for improvement were infrastructure, social and affordable housing, tourism, culture and nightlife economy, education, employment and reviving the high street. These were ambitious by any measure. But Council Leader, Gerry Clarkson, knew there were to be no half-measures if the town was to deliver its true potential.

Housing and infrastructure
Ashford knew if its plans to add the housing required were to be met then the road system would need updating, and the Council worked with the Government and the Highways Agency to add a new £104m motorway junction 10A to the M20. The town and surrounding areas needed to be fully serviceable for any increase in population, employment and attractions planned. The existing infrastructure would only benefit from an additional junction feeding it.

Ambitious expansion plans to add 50 new stores, increase parking and build an immersive modern children’s playground at the premium shopping outlet centre at the McArthurGlen Ashford Designer Outlet required further road access improvements. Easing the flow of traffic and making a town fully prepared for any expansion in population, enhanced the attractiveness of Ashford to housing developers, and three major developments were awarded at Finberry, Chilmington and Conningbrook Lakes, which would see a mixture of accommodation including mixed-use work/live homes in the Finberry development. The Council’s own social housing scheme also began to bear fruit as a sheltered housing project at Farrow Court in Ashford received national recognition for design and functionality.

Another sheltered housing project, Danemore, with 25 one-bedroom and nine two-bedroom apartments, built to a high quality and care ready, was delivered in Tenterden. Further social housing sites at Jubilee Fields, Calland, and Brattle add more homes to the Council’s growing portfolio of social housing properties, with many dozens more planned for the next two years. Mixing affordable housing with good social housing and quality care accommodation ensures a balance of housing covering a wide range of budgets and needs.

Housing is approximately 34% cheaper than equivalent developments in London but with the benefit of Ashford’s space standards, which include the garden in its stipulations. Houses must meet space standards that exceed those of many boroughs up and down the country. The council ensures its own social housing also adheres to those standards.

Civic pride
‘Civic heartbeat’ is a phrase that is used a lot in Ashford with good reason. The whole regeneration plan is designed with the welfare of residents in mind by a council that prides itself as running like a business with residents as the major shareholders. One of the eight major projects agreed was to build a new state of the art college to stop the drain of Ashford’s young talent leaving the town. The council knew that for its regeneration plan to be successful it had to cultivate its future, and to do that through educating the best of Ashford’s coming generations was vital, especially to encourage new employers to the borough.

If you attract people to new homes, you must ensure there is an education system that delivers future hope with employment and that the borough retains the best of those skills. But living, being educated and working in Ashford on its own are not enough to complete the regeneration picture. People want and need places to go to spend their leisure time and their hard-earned money. Ashford set about turning around the reputation of the high street as one that was struggling with store closures and empty units, to one gaining national coverage in the newspapers for its innovative approach.

Whilst by its own admittance and very high standards, Ashford still faces challenges, like any high street up and down the country, it has taken positive steps to turn things around. The purchase of Park Mall for £800,000 saw the Council take over as the landlord of a failing shopping mall, which had a third of its units empty. Four years on and several successful independent businesses have opened and now occupy a fully let shopping mall with an increase in footfall, which has also benefitted the neighbouring but not competing shopping mall, County Square. The retail ethos in Ashford has been about joined up thinking as much as it has in any other part of its housing and regeneration programme.

Enhancing the retail experience
Managing the retail offering in Ashford means there is no clash of interest between Ashford’s offerings at Park Mall, County Square and that of the Ashford Designer Shopping Outlet. Each caters for a diverse range of shoppers but offer something that enhances rather than draws from the shopping experience in Ashford. In-town events make retail more experiential through successful campaigns such as the Snow Dog trail and activities at the town’s recently rebuilt bandstand and surrounding area.

A new in-town brewery, The Curious Brewery, brings not only local employment but also tourism and adds to the day and night-time economy through its restaurant and onsite tours. The Council has also funded the development of Elwick Place, a new independent multiplex cinema in the heart of the town along with an adjoining Travelodge hotel. All are a matter of a few minutes stroll into town or to the international train station and service tourists and leisure seekers looking to extend a day trip to Kent. The night-time economy is essential to the success of Ashford as much as the affordable housing.

Civic heartbeat is not just a mantra but the definition of Ashford Borough Council’s housing and regeneration policy.

With thanks to Ashford Borough Council for preparing this article