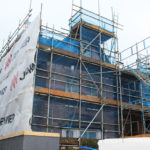 Progress made in tackling homelessness and rough sleeping in Ashford

Ashford Borough Council is spearheading a drive to tackle homelessness and rough sleeping in Ashford, Kent. The council is currently redeveloping a new property, Christchurch Lodge, to provide short-term accommodation for eight households.

Spearheading the council’s drive to keep homeless people out of expensive B&Bs is a bold strategy of providing its own high-quality temporary accommodation, owned and managed by the authority. Christchurch House was the first to open in 2014, and more than 180 households have stayed there before a more settled solution to their housing need is found.

Now a second property — renamed Christchurch Lodge, pictured — is being redeveloped at a total cost of £1m to provide quality short-term accommodation for eight households of up to 25 people. These projects are truly innovative in the savings that are generated and means that they will have effectively paid for themselves in the longer term, with the council retaining a valuable asset.

Real progress is being made in tackling homelessness and rough sleeping in Ashford, with a new focus on prevention helping to drive down the number of people becoming homeless across the borough.

An action plan introduced by Ashford Borough Council has led to the numbers of households accepted as homeless falling by more than half — from 160 cases in 2017/18 to just 71 cases in 2018/19.

This improvement has been driven by a strategy, which has seen the number of preventions nearly double during this same period — from 148 to 293. As a result of this and a range of innovative measures to find alternative solutions, Ashford has been one of the few local authorities in Kent where the numbers of households placed in expensive temporary accommodation, like B&Bs, has fallen.

When the Homelessness Reduction Act came into force in April 2018, there were 179 people in temporary accommodation in Ashford, compared to just 114 today. That’s a fall of 34%.

Action plan endorsed
An update on homelessness was presented to the council’s Cabinet on the 28th November, when councillors voted to endorse the action plan that is continuing to deliver positive results for people facing homelessness in Ashford.

The Cabinet was told that the Act represented the biggest change in homelessness legislation for 40 years. Councils in England had a new legal duty to proactively prevent or relieve homelessness for individuals and families threatened with the loss of their accommodation.

“There is a huge amount of dedicated and co-ordinated work going on to reduce homelessness and rough sleeping in Ashford,” said Sharon Williams, Head of Housing at Ashford Borough Council, whose own background is in homelessness prevention.

“Increased prevention work and robust assessment of applications is reducing homelessness in the first place, while the provision of more cost-effective options for temporary accommodation is helping to cut general fund expenditure on temporary housing. Our approach is succeeding in reducing the numbers in costly temporary accommodation while addressing the needs of homeless people,” added Sharon, who praised members of the Housing team for their hard work in handling the extra workload generated by the Act.

The report to Cabinet shows that there has been a significant rise in rough sleeping in Kent in recent years and Ashford has not been immune. This is against a Government target that rough sleeping be eliminated nationally by 2027.

Making progress
Last winter, the local Winter Night Shelter identified 22 active cases of rough sleeping. Intensive efforts resulted in 12 of these being assisted into alternative housing and of the remaining 10; three had been temporarily accommodated pending fuller assessment.

Sharon continued: “Solid progress has been made in addressing the increased levels of rough sleeping and there are excellent examples of engaging with formerly entrenched vulnerable persons with moves to settled housing.

“More progress is expected after we roll out a new initiative to assist entrenched rough sleepers. There is real optimism that rough sleeping locally can be eliminated with the focused approach already adopted, and having made adjustments to more pro-active service delivery.”

The Cabinet was told that there is a positive benefit in minimising social harm for households who are threatened with homelessness. There will be a continued emphasis on prevention enabling families and vulnerable persons to avoid a ‘crisis’ moment and the loss of accommodation for their household.