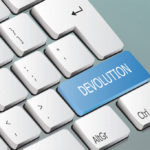 Towns and rural areas in England must benefit from the next wave of devolution alongside cities, with a majority of all people in England wanting greater local decision-making, according to think-tank RSA.

Boris Johnson plans to devolve more powers from central government to local government, especially in the ‘red wall’. Meanwhile Labour leadership candidate Lisa Nandy has said towns must control issues like public transport and Keir Starmer has called for English regions to have more powers in a federal United Kingdom.

Two-thirds of English people live in areas without an elected Mayor, but the lack of agreement between central and local governments over whether this should be a requirement. This means rural areas, towns and smaller cities in England risk being left-behind on growth, public sector investment and the freedom to develop local solutions to problems, the RSA warns.

At the same time, devolution to city regions needs to press ahead, ‘levelling-up’ should not mean Britain’s big cities stand still: they need to level-up with the kind of powers exercised in London and rival cities overseas.

A poll carried out by Populus for the RSA looks at what the English public would like to see next:

Devolution across England
The RSA calls for the Government to proceed with new devolution deals across England, but push for greater innovation from councils in how they involve residents in decisions, arguing participatory budgeting, community engagement processes, citizen juries, deliberative polling, citizen inquiries and focus group could all be used much more by councils.

The poll is being launched at the Innovating Local Democracy Conference — a week-long series of events running from 27rd-31th January and being hosted by the RSA at the People’s History Museum — the national museum of democracy — in Manchester. A full report by the RSA looking at how England can be rebalanced will be published next month.

Ed Cox, Director of Power and Place at the RSA, said: “Mayors have quickly become champions for English cities, but the consequence of a lopsided devolution is that our towns, rural areas and smaller cities risk falling further behind our cities, and city devolution itself has stalled.

“At the same time, the public clearly want to see a more local approach than today in most policy areas, but there’s little evidence that councils are much better than national government at engaging the public.

“This means we need to see much more democratic innovation from councils of the kind being used in towns and cities all over the world, in exchange for new powers from central government — including the possibility of a Mayor.

“Manchester — the home of this week’s International Week of Democratic Innovation — has historically been at the cutting edge of democratic reform in Britain, and once again it is setting the pace as it welcomes visitors from places like Madrid, Melbourne and Montreal where citizens’ assemblies are now used as a matter of routine alongside political decision-making.”

“As elected Mayor, I’ve worked with partners across the towns and cities of Greater Manchester to change the way we think about issues like ending rough sleeping and helping young people access opportunities with free bus travel.

“For too long, too much decision-making has been conducted in a top-down manner. The result, as we now know, is one of the most politically centralised and regionally unequal countries of its kind in the world today.

“By devolving powers and funding to towns and cities we can reverse this trend, working with residents, businesses, voluntary groups and others to find local solutions to some of the biggest challenges we face as a country: delivering health and social care, tackling climate change, and supporting good, secure jobs that pay a real living wage.”