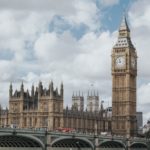 After vital restoration works, the iconic Grade 1 listed Westminster Hall – the oldest part of the Palace of Westminster – has been returned to its full glory so it can be appreciated for decades to come.

Works to clean the hall’s 14th century hammer-beam roof internally; carry out essential repairs to the roof timber trusses; repair and restore the lead-covered roof lantern; install fire safety equipment, including an automated fire detection and voice alarm system; and install all cabling infrastructure for a future lighting scheme have now been completed. 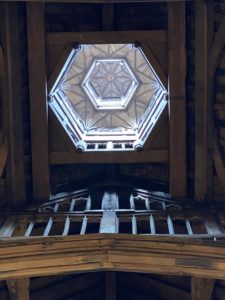 Gary Buick, director at Pick Everard, which is one of Perfect Circle’s shareholders and founding partners, said: “Westminster Hall is a key thoroughfare to the Palace of Westminster and used by hundreds of people daily. Over the past few years, restoration and maintenance works have been carried out to ensure the hall remains safe for public use.

“The roof lantern atop the hall has been carefully dismantled and restored using traditional craftsmanship. Hidden since 2005, the ornate timber interior of the lantern can be seen once more.

“Not only can the public experience Westminster Hall in its original glory, but the beams and lantern shouldn’t require further conservation work for another hundred or so years, providing a lasting legacy for generations to come.”

The hall – which is deemed to be the gateway to the Palace of Westminster, a UNESCO World Heritage Site – was originally built in 1097 by King William II and later remodelled to include the magnificent hammer-beam roof by Richard II in 1393. It is the only part of the palace that survives in almost its original form, despite being ravaged by a fire in October 1834 and damaged by an incendiary bomb during the Second World War.

The uses of the hall have included great state occasions, tournaments, coronation feasts, state trials and even a marketplace. Notable historical events include the trials of William Wallace and Charles I and, in more recent years, ceremonial addresses by the Queen, Nelson Mandela and Barack Obama. Today, it continues to be used as the venue for lying-in-state royals, as well as a raft of events and public displays.

After the hall was bombed in the war, the roof lantern that sits atop the roof was rebuilt in the 1950s. In 2005, a temporary crash deck was installed to ensure the structure was safe, but which obscured the view of the lantern – limiting public appreciation for more than a decade.

Gary said: “As the roof lantern is a timber structure with lead cladding, cast lead detailing and internal timber panels, its restoration required a lot of specialist carpentry works. For health and safety purposes, we couldn’t put any additional weight on the roof so a complex, self-supporting scaffold bridge was constructed so work could be carried out.

“It was of great importance that the lantern remained true to its roots, so the original sand-cast lead was removed, melted down and re-cast using the same traditional method that was applied when it was made in the 1950s.

“Now the repair and restoration of the lantern is complete, the temporary crash deck has been removed, which has once again opened up its true magnificence to all walking through the hall.” 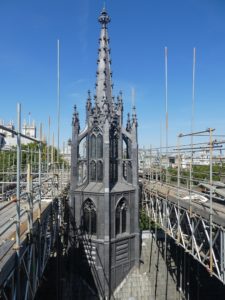 Westminster Hall’s grand roof, which was commissioned by Richard II in 1393, is the largest medieval timber roof in Northern Europe. It is home to 13 oak hammer-beams, weighing some 660 tonnes, that were largely manufactured off site and transported to Westminster by barges and horse-drawn wagons for assembly.

Gary said: “When essential repairs and cleaning were being carried out on the roof, 360 litres of dust was removed from each roof truss. A fully automated fire detection and voice-activated alarm system was also installed as part of the works. The equipment has been obscured from view – remaining sympathetic to the traditional design but updating the technology to suit modern standards and safety requirements.”

Part of the project’s vision was for Westminster Hall to remain open to the public throughout the construction works, subject to closures as a result of the coronavirus pandemic.

“One of the biggest challenges was to maintain health and safety and the operational requirements of the hall so the public wasn’t inconvenienced by the works,” said Gary.

“This involved installing large vinyl canvases that included photos of the windows before the temporary, complex scaffolding was put up. Not only did these cover up the supporting framework but, as lots of tourists visit the hall, it meant they could still experience the oldest parts of Westminster rather than seeing a construction site.

“A lot of the work was also undertaken out of hours during evenings and weekends so as not to disrupt the sitting of the House of Lords and House of Commons.”

SCAPE Consultancy is fully OJEU-compliant procurement route that brings together the strongest collaborative team with value for money, while contributing substantially to local social value. 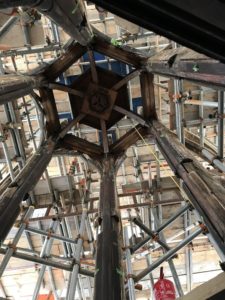 Victoria Brambini, managing director of Perfect Circle, said: “We are delighted to have been involved in such a prestigious project to restore certain elements of one of Britain’s most iconic buildings, which has played a central role in our country’s history.”

Mark Robinson, SCAPE chief executive, added: “After almost a millennium of service, it takes extreme diligence, skill and care to give a building like Westminster Hall the restoration it deserves. The expert guidance and consultation that Perfect Circle has provided to support this high-quality project is befitting of this unique building that contains volumes of British history.

“The refurbishment of the public estate, including that at the very highest end of government, will play an important role in enabling the nation’s economic recovery. This project is an outstanding example of how it can be accelerated through the use of a framework that promotes collaboration and a collective effort to deliver outstanding project results.”