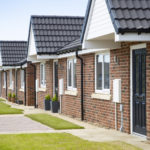 More than 100 new affordable homes have been completed in the east Durham town of Peterlee after investment by a multi-award-winning housing association.

Three brownfield sites in Peterlee have been transformed by County Durham-based believe housing to create 108 new homes. A mix of family houses and bungalows have been constructed in Robson Avenue, Tamar Close and Teign Close.

The new Peterlee homes are currently welcoming their first families after a £17m investment. They are a key part of believe housing’s £70m, 700 home construction programme that has won a string of awards.

In Robson Avenue, the site of the old Eden Community Primary School, vacant since 2008, has seen 48 two- and three-bedroom houses plus 19 bungalows built. The houses included 25 available through the Government backed ‘Rent to Buy’ scheme.

The Robson Avenue project was conceived by Vistry Partnerships North East. Using some of its own Affordable Housing Programme (AHP) grant — secured from Homes England — the regeneration and housing specialist identified the site, developed the design concept and led the planning process to unlock the potential of the unused plot. It then constructed the homes in partnership with believe housing.

A short distance away in neighbouring Tamar Close and Teign Close, 29 three-bed family houses have been built alongside 10 two-bed and a pair of three-bed bungalows. Construction has been carried out by North East-based contractor Tolent.

believe housing Development Delivery Manager, Rebecca Marshall, said: “Peterlee is one of the areas with strongest demand for affordable homes in the North East. That’s why we’ve invested heavily in the area and focused a significant proportion of our construction programme on Peterlee.

“We’re really proud that we’ve been able to deliver these new homes on brownfield sites that have been easy to integrate into the community, while still helping to meet demand. These new homes are going to provide dozens of families with secure and affordable housing for decades to come.”

Andrew Rennie, Development Director with Vistry Partnerships North East, added: “We are delighted to be continuing our partnership with believe housing and to have been able to use our expertise, experience and grant funding to identify and kick start viable projects, which the region’s housing providers to meet housing need.”

Chris Price, Regional Director for Tolent, said: “I’m very proud of the team who have delivered an outstanding, high quality project that we know is going to make a huge difference to the local community here in Peterlee. It was great working with the believe housing team, and we look forward to working with them again soon.”

In April believe housing announced it had become the first organisation in the sector to achieve the Carbon Neutral International Standard.