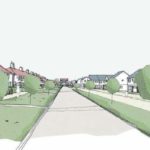 Go-ahead for first of thousands of new Liverpool homes

A major development, set to deliver the first of thousands of new-build homes for Liverpool, has received the green light from planners.

Lovell is set to start work in spring 2019 on the mixed-tenure scheme to transform two pieces of land between Denford Road, Ackers Hall Avenue and Dunchurch Road with high-quality new homes for sale and rent.

The homes are the first to be built through Foundations’ c. £1bn programme to deliver 10,000 new and refurbished homes over the next 10 years, helping meet the city’s target of creating 30,000 new homes by 2030.

With small terraced properties dominating local housing stock, there is also an urgent need for larger family homes and properties, which are suitable for modern lifestyles and flexible enough to be ‘future-proof’ as residents’ needs change.

The Chair of Foundations, Frank Hont, said: “We’re delighted to get consent for this development and look forward to moving on site at the earliest opportunity to commence work. This is just the first of a number of schemes we will be bringing forward in the coming months and years to provide the right kind of homes for our residents and our communities.”

Lovell Regional Partnerships Director Tahreen Shad commented: “It’s fantastic that this scheme has been given the go-ahead, marking an historic moment for housing in Liverpool. As a company, which is based locally with a strong record of delivering high-quality new homes for the city, we’re excited to be working on this pioneering development with Foundations and the council. The scheme will make an important contribution to the availability of locally affordable family homes in the city’s Yew Tree area. We look forward to creating modern, well-designed homes which properly meet the needs of the local community, as well as helping boost local areas through job creation and training opportunities.”

The new homes for Yew Tree will take shape on land previously occupied by a city council housing estate and will provide 56 two-bed, 39 three-bed and four four-bed houses, as well as six bungalows.

All will have front and back gardens and off-street parking and will be built to modern standards of insulation and energy efficiency. Properties have been designed to be easily adapted as residents’ needs alter over their lifetimes. The scheme has been developed following extensive consultations with the local community and has been sensitively designed to respect the amenity of nearby homes.

Local ward Councillor John Prince spoke in support of the proposals, particularly mentioning the delivery of high-quality family housing for local people as well as the commitment to contribute to the enhancement of the existing local green space that sits between the two pieces of land where the homes will be built.

Councillor Irene Rainey welcomed the approach to consultation, especially the amendments made to incorporate six bungalows into the scheme following a specific request from members of the local community.

The new homes will benefit from a location in a well-established residential area with excellent transport links and an extensive range of local services and amenities on their doorstep, including Blueberry Park Primary School; GP services; supermarkets and pubs, cafes and restaurants.

Foundations is the flagship housing policy for Liverpool Mayor Joe Anderson, who wants to use the company to rebalance the city’s social housing stock, revolutionise the rent-to-buy sector and drive up council tax receipts.

It has been tasked with creating bespoke properties for the homeless, foster carers, large families, the elderly and people with a disability and to improve the availability of good quality, affordable homes in the city.

Mayor Anderson said: “The approval of its first scheme is a great milestone for Foundations and I look forward to many more developments becoming a reality over the coming years. Giving people hope and a stake in this city’s future is at the heart of Foundations as we look to create not just new homes but new communities as well. We are at the beginning of this journey but it’s one that has been well mapped out and will be delivered.”