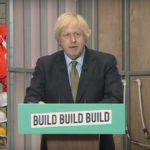 Prime Minister promises “New Deal” which delivers jobs, skills and infrastructure for Britain. In a speech in the West Midlands today, Boris Johnson set out the first step in government plans to “build back better” in the wake of coronavirus, for the benefit of every corner of the country. The PM also announced radical reforms to the planning system that government believes will make it easier to build better homes where people want to live.

In his speech, the Prime Minister underlined his commitment to ‘build, build, build’ in order to upgrade Britain’s infrastructure and skills to fuel economic recovery across the UK, announcing an investment of £5bn.

The Prime Minister announced that government will bring forward £5bn of capital investment projects, supporting jobs and the economic recovery, including:

To support the ambition to ‘build build build’, in the Autumn government will publish a National Infrastructure Strategy which will set a clear direction on core economic infrastructure, including energy networks, road and rail, flood defences and waste.

The Government also intends to bring forward funding to accelerate infrastructure projects in Scotland, Wales, and Northern Ireland — saying it will work with the devolved administrations to identify where it can get spades in the ground, build our communities, and create jobs faster for citizens across the United Kingdom. Government will carry out a review to look at how best to improve road, rail, air and sea links between the four nations to create a more connected kingdom.

Investment good news for people and industry
Commenting on the announcement, ECA CEO Steve Bratt said: “This substantive commitment to infrastructure investment is good news for both citizens and our industry. Government spending will help drive the industry to recovery following the recent pandemic and lockdown.

“Furthermore, with many firms either struggling to survive or holding back their own investment plans, this major investment will help protect jobs and the viability of small businesses.

“ECA also strongly supports the need for green infrastructure investment, and will be holding the Government to account on their plans in this area. Decarbonising transport and buildings both remain fundamental to meeting our legal climate targets, as well as delivering a more sustainable future.”

The Government also recently announced plans for a more collaborative approach to procurement and outsourcing, based around value rather than cost.

ECA Director of Legal and Business Rob Driscoll added: “The injection of Government spend into infrastructure is the first of a number of strategic steps within the CLC roadmap to ‘restart’ the industry economy.

“Inevitably as infrastructure moves forward, this will lead to a consequential rise in commercial construction and FM.

“ECA will work with CLC and Government to ensure that the value (rather than cost) procurement models used to implement this pipeline embeds the fairer and collaborative contractual and payment practices CLC is targeting to re-set and re-invent our economy to the benefit of SME inclusion.”

Planning reforms
Boris Johnson also announced the most radical reforms to the planning system since the Second World War, which are intended to make it easier to build better homes where people want to live. The new regulations will give greater freedom for buildings and land in town centres to change use without planning permission and create new homes from the regeneration of vacant and redundant buildings.

Under the new rules, existing commercial properties, including newly vacant shops, can be converted into residential housing more easily, in a move to kick start the construction industry and speed up rebuilding. The changes include:

These changes, which are planned to come into effect by September through changes to the law, government believes will both support the high street revival by allowing empty commercial properties to be quickly repurposed and reduce the pressure to build on green field land by making brownfield development easier. Developers will still need to adhere to high standards and regulations, just without what the Government sees as unnecessary red tape.

Boris Johnson said: “We will build fantastic new homes on brownfield sites and other areas that with better transport and other infrastructure could, frankly, be suitable and right for development.

“And we will address that intergenerational injustice and help young people get on the housing ladder in the way that their parents and grandparents could.

The Prime Minister posed the question: “Why are we so slow building homes by comparison with other European countries? In 2018 we built 2.25 homes per 1,000 people. Germany managed 3.6, the Netherlands 3.8, France 6.8.

“I’ll tell you why — because time is money. And the new counting delays in our system are a massive drag on the productivity and the prosperity of this country.

“So we will build better and build greener, but we will also build faster.”

The Prime Minister also announced that work will begin to look at how land owned by the Government can be managed more effectively.

Ahead of the Spending Review, a new, ambitious cross-government strategy will look at how public sector land can be managed and released so it can be put to better use. This would include home building, improving the environment, contributing to net zero goals and injecting growth opportunities into communities across the country.

These announcements come alongside a package of measures to support home building across England. These include:

It was also announced that the Government will launch a planning Policy Paper in July setting out its plan for comprehensive reform of England’s seven-decade old planning system, to introduce a new approach that works better for our modern economy and society.

Later this year, government will also bring forward a Local Recovery White Paper detailing how the UK government will partner with places across the UK to build a sustainable economic recovery, launch our National Infrastructure Plan and legislate for wider de-regulatory reforms.

The Prime Minister concluded: “If we deliver this plan together, then we will together build our way back to health. We will not just bounce back, we will bounce forward — stronger and better and more united than ever before.”

“If we do not seize this moment, and take the opportunity to underpin our recovery plans with climate ambition, we will not achieve our target of net zero emissions by 2050. Yet the plans announced by the PM today make no reference to energy efficiency — perhaps the most urgent of all infrastructure priorities — that can create jobs right around the country, improve health and reduce costs to NHS, and increase consumer spending power by lowering energy bills. All this despite universal support for a national retrofit strategy over the past few weeks from wide ranging industry and academic institutions, and a 2019 manifesto promise of £9bn in insulating our draughty homes.

“We welcome a focus on levelling up the fortunes of individuals right across the country through investment in new homes and infrastructure, but a frenzy of building is not equivalent to building back greener. Such investment must be underpinned by the highest quality outcomes including efficiency, net zero emissions, waste avoidance, social value and biodiversity net gain. Yet on the basis of current Building Regulations and planning standards, none of these outcomes would be guaranteed.

“I sincerely hope that the Chancellor’s budget announcement next week will provide much-needed detail on the way this Government will practically ‘build back better’.”

“Working at speed brings challenges, which will require careful project management. In particular, project teams will need to balance the need to adhere to Covid-19 constraints, with the need to deliver buildings that are fit for purpose, as quickly as possible.

“Speeding up the delivery of infrastructure projects must not lead to corners being cut. There are several potential issues here — for example, if procurement procedures are circumvented or abbreviated in some way, this could mean taxpayers don’t get value for money. Early-stage workshops must also be thorough, ensuring there is input from contractors, to avoid the need for costly delays or re-designs at a later stage.

“This is a chance for the UK construction industry to put past lessons to good use and drive national economic recovery.”