Martyn Bridges, Director of Technical Communication and Product Management at Worcester Bosch, discusses the latest field trials of hydrogen and what potential this has for social housing.

There is not much that came out of 2020 which we can class as good. The pandemic understandably became a huge priority for the whole world, let alone the UK, and is something that will no doubt be an important focus this year as well.

It is promising then, that even during uncertain times, the battle against climate change and the road towards net zero 2050 continues. The 10-point plan from the Prime Minister set out a clear route forward, bolstered by the Energy White Paper launched towards the end of last year. Various trials and tests are underway, including at ‘HyStreet’ in Northumberland.

The project is part of H21 (a Network Innovation Competition project sponsored by Ofgem), which sets out to prove that the UK’s natural gas grid can safely carry 100% hydrogen gas. Hydrogen is a promising carbon-free alternative to the fuel we use currently, particularly due to the fact when burned its only bi-product is water and is getting a lot of notice as a future fuel for cars and aersopace as well as our homes.

HyStreet consists of three specially built houses, which have seen over 200 tests to prove the safety of converting homes and gas networks to hydrogen. A number of prototypes, including our own, are installed and running there as part of the trial.

It is good to see that our prototype hydrogen boiler has been running successfully at this demonstration site. In its first few months it has operated seamlessly, effectively providing heating and hot water. As an initial test it is an encouraging step towards the deployment of hydrogen gas on a wide scale.

But what do these early tests mean for existing social housing and affordable homes? 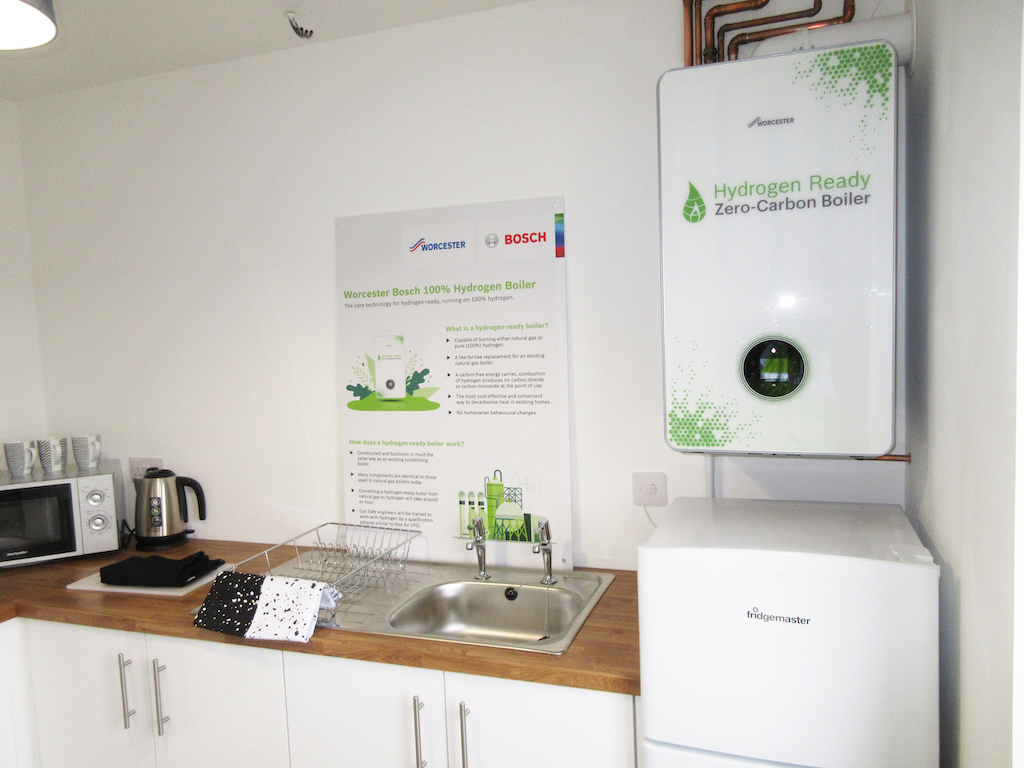 Opportunities for existing homes
The potential for hydrogen in existing properties is promising, and that includes social housing. It is very difficult, by contrast, to lower the carbon emissions of an existing heating and hot water system with the alternative, an electric heat pump.

Gas fired combi boilers power a large proportion of social housing heating systems, so replacing them with anything other than a carbon free gas system is prohibitively expensive. Without evidence to the contrary, through trials such as HyStreet accelerating the adoption of hydrogen, housing associations may have no choice but to opt for a heat pump installation, and that brings with it a number of challenges.

The largest issue for housing associations and councils would be the sheer cost (of heat pump installations replacing boilers). There have been a handful of cases where a heat pump system was installed instead of a boiler, such as Leeds City Council who undertook a small trial. Here, the cost per house was around £27,000. Quite a figure! If a housing association or local authority looks after say one hundred social homes, then the cost to adapt their heating systems to a heat pump could be astronomical.

By comparison, early indicators show that replacing your existing boiler with a hydrogen-fired alternative will be more or less the same cost as replacing a boiler today would cost, which I imagine would be much more attractive to associations.

Overcoming challenges
Another challenge for converting existing social homes to an electric heat pump is twofold: disruption to the occupier and space limitations. Combi boilers are popular for their efficiencies: they provide both heating and hot water from one space-effective product. However, a heat pump requires a sizeable hot water cylinder, which would need to be located in a home either on a landing, airing cupboard or bedroom, taking up valuable space which may not be readily available in the current home layout.

Which brings me to another issue, disruption to the occupier. The whole heating system will need to be adapted to run on a heat pump. The radiators and piping will generally need to be resized, as well as other remedial work to the home such as insulation to raise to an energy level rating suitable to make a heat pump run efficiently. Another costly element, which also will cause a lot of unnecessary frustration to the occupier.

The final issue is user education. Due to the way it runs, a heat pump is better to be switched on for long periods at a time to ensure the right temperature for the home. With a boiler you can simply switch on whenever you feel cold. This may seem like a small change, but after years of using a boiler instilling new routines could cause some difficulty.

With all this in mind, hydrogen is really the saviour that prevents all of these issues at the ‘house end’ of the gas pipe. The challenges of getting hydrogen down the pipe from the place of production shouldn’t be an issue that Government or occupiers concern themselves, it is something the utility and heating industries can solve.

With trials like HyStreet underway and hydrogen taking a prominent place in the Government’s plans along with heavy investment being promised — the future for hydrogen heating is very positive indeed.