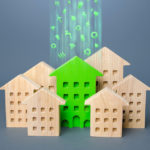 ‘Is this the best way to decarbonise council housing?’ asks Matthew Warburton, Policy Advisor at the Association of Retained Council Housing (ARCH).

Among the manifesto commitments the Conservative government has not yet abandoned is the promise to spend £3.8bn improving the energy performance of social rented housing over the next ten years as part of its commitment to net zero by 2050. So far it has funded the retrofit of 2,300 homes in 19 demonstrator projects, and, in August invited bids for £160m of Social Housing Decarbonisation funding to be spent in 2022. Councils and other Registered Providers have until 15th October to put together bids; BEIS will announce the lucky winners in January. Allocations must be spent by January 2023.

The Government, for obvious reasons, wants to make the Fund go as far as possible. In the Demonstrator projects the average cost of works per home looks to be just shy of £27,000. Nothing near as much is proposed for Wave 1 of the Fund proper. The Government is expecting a maximum cost per home of £15,000 for Band D or £18,000 for Band E homes.  As the bidding guidance explains, the Demonstrator was intended to learn lessons about ‘high complexity, deep retrofit’ and the majority of schemes involve installation of low carbon heating (in practice air source heat pumps); Wave 1 ‘will not focus on such deep retrofit’ and BEIS ‘does not expect low carbon heating to be proposed for the majority of properties’.

Prospective bidders face a number of headaches. They have just a few weeks to satisfy themselves they can identify homes where the cost of appropriate works meets Government expectations, or that they can make up a shortfall in grant from local resources. They also need to be reasonably sure that they can successfully procure the labour and materials needed when both are currently scarce and be confident that all the work will be completed within at most a year.

And then there are tenants to be consulted. To its credit BEIS at least acknowledges that the impact on tenants is an issue and insists that bidders should “demonstrate consideration of tenants throughout the project”. But the timetable proposed makes it hard to achieve this. The timetable for submitting bids makes it virtually impossible to schedule meaningful consultation with tenants before bids are finalised, and in any case such consultation would only lead to disappointment if a bid were unsuccessful. Consultation after allocations are confirmed eats into the time available to spend them, and what if tenants say ‘no’?

Energy performance improvements
There are also dangers in decoupling energy performance improvements — mainly insulation works — from installation of low carbon heating. Better insulation cuts tenants’ heating costs; switching to low carbon heating in many cases will not. 80% of council homes are heated by gas boilers; at current gas and electricity prices, replacing these with heat pumps will have a marginal impact on fuel bills. By removing any financial incentive, leaving low carbon heating to be done later only adds to the challenge of winning tenants’ agreement to the changes in living conditions and behaviour the switch to a low carbon world involves.

It is hard to know how prospective bidders will react to these challenges. It is quite possible that many will be deterred by the excess of restrictions and, like some other BEIS initiatives, the Fund will be undersubscribed. It is equally possible that the Fund will be oversubscribed, and BEIS will be obliged to reject perfectly viable bids. At the very least, the Government should agree that, if this happens, such bids will have first call on the next Wave of the Fund.