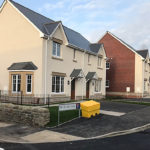 Welsh building contractor, J.G. Hale Construction, has completed work on a 13-home development on the site of the former Heol Y Cyw Primary School in Bridgend, for its client Valleys to Coast Housing Association.

Remarkably, while the demolition work was being undertaken, the J.G Hale Construction team discovered a time capsule, containing old photographs of the workers who originally built Heol Y Cyw Primary School, alongside a bill of quantities, dated to 1911.

To retain features of the site’s heritage, the new development has incorporated an original boundary wall from the old school into its construction, with the additional wall structure built to match. The original school plaque has also been centrally located within the turning head of the development, taking ‘pride of place’, and situated to gain maximum visibility.

As part of the development’s commitment to wider community benefits, Valleys to Coast and J.G. Hale Construction have recently donated a bus shelter for use by the residents at the new development.

David Harrhy, Managing Director at J.G Hale Construction, said: “J.G Hale Construction is delighted to be able to hand over this new development to our much-valued client Valleys to Coast. The mix of different housing options available at the site — from one-bedroom apartments to four-bedroom houses — should be of great benefit to those seeking homes within the local community.

“The discovery of the time capsule left by the original builders was a very interesting surprise. It is now part of the area’s local heritage and will be passed on to the local community, for future generations to enjoy and learn from.”

Darrin Davies, Corporate Director of Development & Growth at Valleys to Coast added: “We purchased the school site from Bridgend County Borough Council as part of their 21st Century Schools modernisation programme. We’re very happy to have collaborated with J.G. Hale Construction on this much-needed development for the community of Heol Y Cyw, near Bridgend. I’m really proud of the quality of the homes that we have completed and the additional contribution of the bus shelter within the community will contribute toward people going to and from Heol Y Cyw.”

Header image shows the new homes at the Heol Y Cyw in Bridgend.