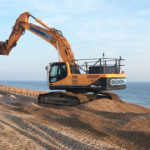 A project to reduce the future risk of flooding for homes in Eastoke, Hayling Island is currently underway.

The annual scheme to replenish sea defences by moving shingle, washed up along the shore, back to Eastoke to shield 1,700 properties will take six weeks to complete.

The South Hayling Beach Management Plan, funded by Central Government, sees thousand of tonnes of shingle being moved from Gunner Point and the Coastguard Revetment. This is transported along the seafront to restore depleted groyne bays at Eastoke, following the recent storms.

Councillor Leah Turner, Havant Borough Council’s Cabinet lead for Finance and Coastal Communities said: “The work to continually replenish the shingle at this end of the island has significantly reduced the risk of flooding and coastal erosion.

“Eastoke beach has stood up extremely well in the recent storms. Now these have passed, our officers have worked with suppliers to bring forward this work to restore the beach once more.”

The beach will remain open to the public throughout the duration of the works with Havant Borough Council and contractor staff onsite to ensure safety.