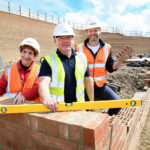 Wall to wall success at Scotswood!

A region synonymous for its famous walls — Hadrian’s is probably the best known — Newcastle is seeing the first bricks laid on top of what is thought to be one of the biggest residential retaining wall structures in the UK.

With a combined length of more than a kilometre, reaching almost 8.8 metres at the highest point and with a surface area of more than 4,800 square metres, the seven retaining walls at The Rise are believed to be the biggest such structures built in the UK in recent years — and there are nine more still to construct.

They have created a series of terraces on the steeply sloping Tyneside valley — allowing the construction of new homes which are part of a major regeneration programme in Newcastle’s west end.

Laying the first bricks to mark the occasion, Alma Wheeler, said: “We have been involved in this project at The Rise since the very beginning — over 15 years ago! It is heart-warming to see what has been achieved in this time, through the provision of new homes and investment in the local community, including support of local groups and facilities, which have benefitted existing and new residents.”

The impressive engineering feat is being delivered for NTWDC — a public-private partnership comprising Newcastle City Council and Keepmoat Homes. It is driving a £265m regeneration project to deliver around 1,800 mixed-tenure homes on the 148-acre site. To date just over 450 have been completed.

Director, Lee McGray, said: “The amount of planning and work that has gone into this civil engineering feat is phenomenal and wouldn’t have been possible without the skills, knowledge and expertise of our partners and contractors. To be here with Alma, Margaret and Hazel to see the start of work on the properties to be built above this wall, is incredibly satisfying.”

From the North of Tyne Combined Authority, Metro Mayor Jamie Driscoll commented: “Abandoned factories, derelict buildings, disused lots. We can all think of a nearby brownfield site that — with some care and investment — could be transformed into a vibrant neighbourhood or fill a gap in the existing local community. Well, that’s exactly what’s been happening here at The Rise in Scotswood, where we’re working together to help build almost 2,000 new houses. It was great to be on site, talking to the workers and actually seeing homes being built with the help of NTCA funding.”

“These retaining walls are an integral part of the development, allowing a south facing river plot to be brought back into use. I look forward to them being completed and the next tranche of houses being built to continue the transformation of this proud part of the city.”

The first seven walls so far created have enabled the second phase of housebuilding at The Rise to get fully underway. The remaining nine walls will be completed as up to 1,400 more new homes are delivered.

The project has been supported by a £2.9m grant from the North of Tyne Combined Authority, earmarked specifically to stimulate housing initiatives on brownfield sites.