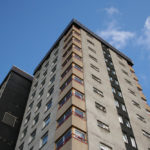 The LGA is calling for the height threshold at which automatic fire suppression systems, such as sprinklers, are required in new residential buildings in England to be lowered to 18 metres — down from the current 30-metre/10-storey limit.

It is also urging the Government to require automatic fire suppression systems, such as sprinklers, to be installed in all new premises where vulnerable people sleep, including care homes and residential schools.

The LGA, which represents 370 councils and all fire and rescue authorities in England, is further calling for the same standards to be applied to existing buildings. It says these measures will provide increased safety protection and reassurance to more people and have been proved to be effective.

Under the proposals put forward by Dame Judith Hackitt last year, owners of existing tower blocks more than 30 metres high will have to satisfy regulators that residents are safe.

But the LGA believes the 30-metre threshold is too high given the practicalities of firefighting and the “safety satisfaction test” should also be extended to cover buildings in which vulnerable people sleep.

It says that if the Hackitt review definition of high-risk buildings is not widened, automatic fire suppression systems, such as sprinklers, should be retrofitted in existing blocks more than 18 metres high, care homes and other high-risk premises where a risk assessment justifies it.

The LGA says studies show sprinklers operate on 94% of occasions and when they do operate they extinguish or contain the fire on 99% of incidents. They also reduce fire injuries and fire damage by 80.

With councils facing an £8bn funding gap by 2025, the LGA is urging government to use its forthcoming Spending Review to provide funding to any council experiencing financial difficulty in meeting retrospective obligations to fulfil these safety proposals, as it has done in respect of remedial work for social housing blocks with flammable cladding.

More than half of the fire and rescue services in England and Wales have experienced a huge increase in prevention and protection work, due to the safety checks carried out on high-rise buildings following the Grenfell Tower fire. These checks have had to be carried out by a fire service workforce, which has fallen in recent years alongside reductions in government funding for all standalone fire and rescue authorities.

The LGA says this is unsustainable and could expose communities to risk unless the new provisions or expectations on fire and rescues services arising from the Hackitt review or subsequent changes in policy are treated as a new burden and funded separately.

Speaking at the LGA’s annual fire conference in Brighton today, Cllr Ian Stephens, Chair of the LGA’s Fire Services Management Committee, said: “Residents have a right to be safe and to feel safe in their homes and automatic fire suppression systems, which can include sprinklers, offer a strong reassurance that is urgently needed following the Grenfell Tower tragedy.

“The cost benefit case for them in new high-rise tower blocks and care homes has been made and retrofitting needs to be considered in existing buildings as part of a holistic approach to fire safety.

“Sprinklers alone are not a universal panacea and installation should be proportionate and risk based. Nevertheless, the investment required may impact heavily in some areas with large numbers of tower blocks, which is why we are calling on government to provide funding for this work as it has for the remediation of flammable cladding.”

A report on the effectiveness of sprinklers can be read here.

A 2012 report by the Building Research Establishment (BRE) on the costs benefit case for sprinklers in most flats and residential care homes can be read here. Similar findings were reported to MHCLG by BRE in 2015 here.

0 0 0 0
Previous : The importance of containing dangerous gases
Next : St Albans Council awards Morgan Sindall contract worth up to £90m