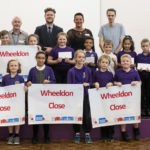 A new housing development by Stafford and Rural Homes (SARH) has been named after a Victorian-era headmaster by youngsters at a school that also bears his name.

Around 160 children from John Wheeldon Primary Academy in Stafford were invited to take part in a competition to find a name for the scheme off Sandon Road that includes eight houses and 15 apartments for affordable rent.

As well as working as a headteacher for many years, Mr Wheeldon became the Town’s Mayor in 1925 having also been appointed a justice of the peace seven years before. The name has since been approved by Stafford Borough Council and announced during a special assembly at the school.

Karen Armitage explained: “It’s fitting that our latest development should be named after such a towering figure in the town’s history.

“It is also fantastic to see children so engaged with Stafford’s history and, of course, its future, as affordable housing will become increasingly vital as they get older.”

Supported by £897K of funding by Homes England, the scheme looks set to transform the area and is being delivered by the housing association’s construction partner, Chrome Services.

Ben Sprigings, Project Manager at Chrome Services commented: “At Chrome Services we strive to provide high quality energy efficient dwellings fit for the future. Implementing both Traditional and modern innovative methods of construction is facilitating the development of eight semi-detached houses and 15 apartments to assist in meeting the demand for ergonomic, aesthetically pleasing and practical housing in Stafford.”

Work started on Wheeldon Close late last year and is expected to be completed by January 2020.

The pupils who came up with the winning name suggestion were entered into a draw to win a £50 gift voucher and runners up prizes of £10, donated by Chrome.