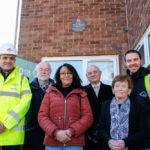 A plaque to honour former Prime Minister David Lloyd George has been unveiled at the site of the home where he was born. Regeneration specialist Galliford Try Partnerships commissioned the plaque for the New Brunswick development, where it is building 436 new homes in partnership with S4B.

It is displayed on the front of a Mavis Jeggo’s new home on Wadeson Road, Chorlton-On-Medlock, Manchester, which sits on the site of the Liberal Party politician’s birthplace, 5 New York Place.

Mavis said: “I’m very proud to have the plaque on my home and it was a real honour to be part of the unveiling ceremony — such a very special day.”

The plaque was officially unveiled at an event to coincide with what would have been David Lloyd George’s 156th birthday. Attended by development partners, local residents and representatives from Manchester City Council, it was the first in a series of celebrations to mark the first five years of the £106m, 25-year regeneration project in the Brunswick area.

Galliford Try Partnerships is part of the S4B joint venture, a consortium including Equitix, Mears and Onward Homes, delivering all aspects of the flagship regeneration scheme.

Craig Nemeth, Project Director at Galliford Try Partnerships, said: “The changes at Brunswick are not just about bricks and mortar but about building the community, so we felt this was a very fitting tribute to our former Prime Minister. And the fact we are celebrating the first five years of the regeneration project here in New Brunswick makes this landmark occasion even more special — more history in the making.”

A member of the Liberal party, David Lloyd George was born on 17 January 1863 and served as Prime Minister from 1916 to 1922. During his time in office he introduced a number of major reforms, including raising the school leaving age to 14 and prohibiting the employment of children below compulsory school leaving age.

New Brunswick has a rich and varied history. As well as being the birthplace of the First World War Prime Minister, it is also home to Manchester’s oldest graveyard and the Brunswick tunnels, which were created as makeshift air raid shelters during WWII. All these unique accolades have been incorporated into the wider development.