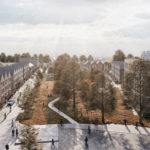 The redevelopment of Sunderland’s Civic Centre site into a stunning new residential community, has taken another step forward with the submission of a detailed planning application for 265 new homes.

Vistry Partnerships Ltd has made a planning application to deliver an attractive, landscaped residential community, that will replace the brutalist civic centre which is no longer in use following the opening of City Hall in November.

The North East developer hopes to develop an exciting new neighbourhood of city centre homes, teamed with high quality public open spaces and cycling and pedestrian links to the rest of the city, which will provide a boost for the city centre, placing hundreds of residents on the doorstep.

Vistry, which is already delivering a high quality housing scheme in Ayton, Washington, was named preferred developer earlier this year, and has been working with the community to shape plans for the area. The company will develop a mixed-tenure community of open market and affordable homes with modern and spacious properties ranging from one to four bedrooms.

The scheme will include attractive areas of formal and informal amenity space and enhanced pedestrian and multi-user links to the city centre, Ashbrooke and Mowbray Park. The proposed architecture and streetscape will be sensitive to the parkside location and the Ashbrooke Conservation Area.

Andrew Rennie, Development Director with Vistry Partnerships North East, said: “Taking another step towards delivering this exciting project before the end of the year is an exciting development. We are confident this will be instrumental in improving housing choice, employment opportunities and will regenerate a key, high profile site in Sunderland.”

Sunderland City Council announced plans to relocate from its Civic Centre base to Riverside Sunderland in 2019, and work commenced on City Hall later that year. Bringing together a range of public sector partners, who will work from the 190,000sq ft office space, City Hall was funded by institutional investor Legal & General, who are also working with developer Landid to build two speculative offices that will stand adjacent to City Hall. The move paved the way for the redevelopment of the Civic Centre site, with Vistry coming out top of a competitive bidding process.

Councillor Graeme Miller, Leader of Sunderland City Council, said: “The former Civic Centre site represents an exciting development opportunity, and Vistry’s plans maximise it, delivering an attractive new residential community with plenty of open spaces that will allow people from neighbouring communities to pass through to make their way into the city centre.

“We’re working hard to double the residential population in the city centre, because we know this will make a step change in the area and deliver upon the social and economic objectives in our City Plan. We’re delighted to see Vistry pushing ahead with its plans.”

The new homes on the Civic Centre site are part of a wider plan to build more than 7,000 new homes across the city by 2030. This will ensure that Sunderland has the volume and variety of homes it needs to attract and retain a diverse range of residents.

Among other housing developments moving forward across the city are new coastal communities being created by Avant Homes and Miller Homes at Seaburn; attractive family homes being delivered by Miller Homes, Story Homes, Duchy Homes, and Bellway at Potters Hill and Burdon Rise, a £40m scheme delivered by Karbon Homes in North Hylton and a £400m+ plan by Gentoo to invest in its existing stock, as well as significant new affordable homes programme. Sunderland City Council is also delivering on ambitions to develop contemporary new city centre homes on the Riverside Sunderland site, and at Northern Spire Park alongside the stunning Northern Spire bridge and has declared ambitions to create a new creative community at Sunniside.

The header image shows a CGI of how the development might look.