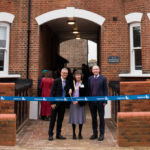 Cllr Janet Smith, the Mayor of the City and District of St Albans, officially opened the new homes at a special event. The flats, based at Marlborough Road in St Albans, were formerly 10 bedsits (two self-contained and eight single rooms with shared facilities) for social housing residents.

The refurbished one- and two-bedroom flats all have their own living room, kitchen, bedroom(s) and bathroom. They will go to homeless single people and families referred to Hightown by St Albans City and District Council. The council provided a grant to carry out the refurbishment works and support some of the running costs for the temporary housing scheme.

All of the residents will have a Support Worker so they receive the help and support they need. Whether that is accessing health services, help with managing their money or looking for training and job opportunities.

Hightown runs a number of other temporary housing services in St Albans, including the Open Door night shelter. On 6th December, the Mayor will be joining the annual St Albans Sleepout and raising money for Open Door.

Cllr Janet Smith, Mayor of St Albans, said: “Reducing rough sleeping in our city is really important, especially during these cold winter months. This new service and the help available from a Support Worker will be vital for people to begin rebuilding their lives. I’m really pleased that they will be able to spend Christmas in a home of their own.”

David Bogle, Chief Executive for Hightown Housing Association, said: “I’m delighted that, with the support from St Albans City and District Council, we have been able to open a new scheme for homeless people. We are extremely proud of all our homeless services in St Albans District and we’re committed to playing our part in reducing homelessness by building new affordable homes and providing housing with support.”

0 0 0 0
Previous : T. Gunning ensures compliance with fire safety standards
Next : Moray pupils get hands on at ‘Constructing Your Future’ workshops