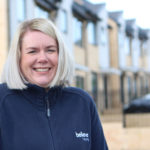 A key figure in an initiative to reduce suicide in County Durham has been left stunned after receiving an MBE.

Jayne Adamson (pictured above), who works for County Durham-based believe housing, was awarded the prestigious accolade for services to housing and suicide prevention in the Queen’s birthday honours list.

Jayne has led a 17-strong team that volunteered to offer support to people struggling with mental health concerns during the pandemic, alongside their day job.

The team, drawn from all parts of the housing association, was set up to help customers through times of crisis particularly people who were experiencing suicidal thoughts. During the early stages of the coronavirus pandemic they saw an increase of 50% in the number of people they were supporting and are now helping people still affected by the local restrictions in place.

“It’s a massive honour to receive an MBE, but it is very much a team effort. Everyone who has taken part should be recognised.” Jayne said.

“Never in my lifetime would I have thought I’d receive an MBE, I just can’t get my head around it. When I got the email telling me, I couldn’t believe it was real.”

“We’re here to listen to anyone with concerns about their wellbeing. We’ve supported customers who were left isolated and without access to their usual support during the pandemic, and even customers who found that their medication was interrupted because of the coronavirus restrictions.

“Some of the customers we’ve spoken to have been quite open in saying that they don’t think they’d still be here without the support they received from us. To have such a positive impact on people’s lives is more important than any formal recognition.”

The team at believe housing do not just offer support in a crisis. They work with people to see them through to a better place and have supported customers for anything from a few hours to weeks, working closely with everyone from GPs to the police to get people the support they need from the experts.

Executive Director of Communities and Customer Service at believe housing, Nik Turner, said: “Jayne’s very humble about the work that she, and the team, have done. But we know just how much time and energy they give to support people in their time of need; and it’s really made a difference.

“They have gone above and beyond to ensure that some of the most vulnerable people we work with are not alone, even during a global pandemic. Jayne really has been a key part of saving lives with the work she leads.

“She fully deserves to receive this honour and we are very proud that she is being recognised at this level.”

Other organisations, including Durham County Council, are now keen to learn more about the work of the team and looking to implement similar processes to protect vulnerable customers.