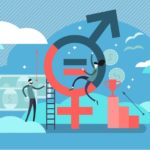 Construction union GMB has revealed it will take nearly 200 years to achieve gender equality in the construction industry.

The analysis, revealed at GMB’s annual Congress in Brighton today, shows at the current rate of growth, the number of women in construction will equal men by the year 2194.

GMB has arranged a summit with the major construction companies working in the £18 billion Hinkley Point C project to discuss the lack of women in construction.

GMB will meet HPC bosses and contractor Doosan Babcock to discuss ways to recruit more women on the construction of the huge nuclear reactor. ONS data also shows that just one in eight construction workers are female – the lowest share of any broad industrial group. 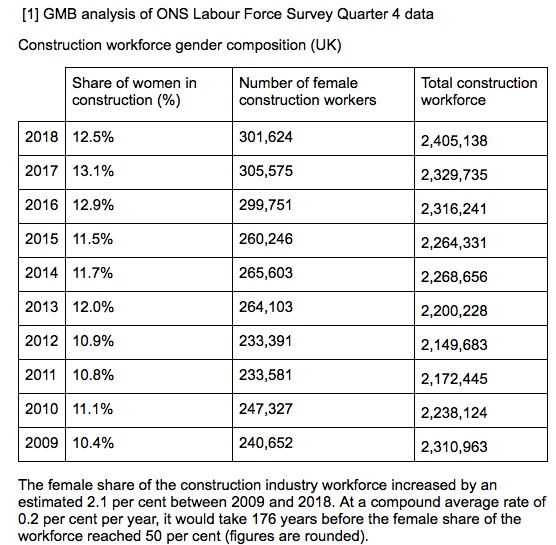 There are an estimated 60,972 more women in the construction industry than there were in 2009 – but as a proportion of the overall workforce the female share of the labour force increased by just 2.1 per cent.

At this rate, it would take almost two hundred years before there was gender equality in the industry.

Jude Brimble, GMB National Secretary, said: “Our analysis is a sobering reminder of the scale of the challenge facing the industry. As a union we are committed to advancing the cause of gender equality in all industries. That’s why we have arranged our ground-breaking Hinkley Point summit where we will discuss with the major players how to increase the number of women in the construction of the project.”

Angela Rayner, Shadow Education Secretary, said: “These figures show the scale of the challenge but major state-backed projects like HPC are a chance for the government to step in and take action. Ministers should tell us how they will ensure that the opportunities they present will be open to all.

“We need to ensure that apprenticeships, for example, are available to more women and people who are historically underrepresented in certain jobs and industries. But the Tories’ record has fallen far short their rhetoric, failing to set robust targets let alone meet them.

“A Labour government will do things differently. We will set clear and ambitious targets for recruiting female apprentices, reform the Institute for Apprenticeships to deliver wider participation, and be held to account by an empowered and independent Social Justice Commission. These changes will help women break through the barriers and ensure that everyone has opportunities to work in the key industries of the future.”

Nigel Cann, HPC Delivery Director, said: “At Hinkley Point C, we aim to create an environment which supports more diverse and inclusive teams and to increase the number of women in the construction phase and beyond.

“We want to support more women entering the industry and to encourage progression of those who are already working with us. Success in this area is already being seen within EDF Energy’s apprenticeships where almost 40% of the current cohort are female – a substantial improvement against industry averages.

Andy Colquhoun, Doosan Babcock CEO said: “Historically the engineering construction industry in the UK has been male dominated; Doosan Babcock’s drive in relation to diversity and inclusion in the workplace is a core element of our education, attraction and recruitment programmes.

“Increasing awareness and creating routes for women to enter the industry and contribute to a project such as HPC is not only the smart thing to do but also morally right. The Hinkley Point C project allows us to progress this further in partnership with our client EDF and with our Trade Union partners.”