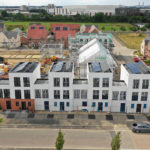 The first home in London’s only modular commuter village, Etopia Corby, has been completed inside and out, MMC specialist Project Etopia reveals.

The superstructures of the first three-storey townhouses in Corby, Northamptonshire, were completed in just 34 days, and the first house — the scheme’s showhome — has now been decorated and furnished.

Etopia Corby is a 47-home eco project in Priors Hall Park consisting of 31 houses and 16 apartments. They are all equipped to produce their own energy, coupled with an earth energy bank/GeoStore system, which stores heat energy while batteries store electricity. This means residents enjoy little or no energy bills.

Etopia Corby has been chosen as one of five Building for 2050 research projects funded by the Department for Business, Energy & Industrial Strategy and is a model of how villages of the future can be developed quicker and more affordably.

Corby is at the centre of an ambitious project to double the population from 50,000 to 100,000 by the early 2030s. It is already popular with young workers commuting to London, which is as little as an hour and 10 minutes away by train.

The commuter credentials of Priors Hall Park, where the homes will be built, have also been boosted by a high-profile publicity campaign featuring Stephen Fry, which dubbed the area ‘North Londonshire’. A typical three-bed Etopia house in Corby will go on the market for between £295,000 and £350,000.

Project Etopia homes are designed to deliver performance similar to the ‘Passivhaus’ energy efficiency standard to complement their eco-friendly technology. The developer uses a panelised build system, which means wall panels are produced in a factory and delivered to site for assembly. This reduces construction time, lowering the cost to homebuyers. The panels have a thermal efficiency U-value of 0.13, which is superior to the 0.16 U-value for a typical well-insulated wall in a new build brick property. Most importantly, the panels’ air tightness is markedly more effective at maintaining heat within the home than traditional build solutions.

Also key to the Etopia Corby project is the energy storage system married to each dwelling. 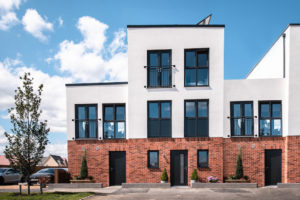 The scheme embraces the CHESS SETUP (Combined Heat Supply System by using Solar Energy and Heat Pumps). This is a Horizon 2020 programme, which aims to implement a reliable and efficient heating system that can supply buildings via renewable energy sources.

The Corby project is the only UK location working with the CHESS SETUP. The technology reduces emissions by using hybrid solar panels to generate heat that can then be stored and used by the ground source heat pump for hot water and heating. The energy earth bank/GeoStore system stores heat energy while batteries store electricity.

The system has been optimised to meet the specific demands of the Corby site, and the installation monitors key data such as available heat energy, weather forecasts and electricity prices to optimise the energy flows within the systems. It is also connected to an independent electric grid owned by utility network provider GTC and the energy produced on site can be diverted to the grid if necessary, ensuring nothing goes to waste.

Joseph Daniels, CEO of Project Etopia, commented: “Opening the doors to the completed house for the first time was an exciting moment for the whole team. It’s the realisation of months of hard work. This house is evidence that modular housing delivers desirable homes for everyone in no time at all, with all the cost, labour and time savings that help us keep prices at an affordable level.”