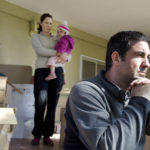 On the opening day of their Annual Conference, the District Councils Network are warning of a surge in homelessness and a rise in families needing help with the cost of living since the ban on evictions ended earlier this year.

This early warning comes as the effects of the removal of the universal credit uplift, furlough and other measures are yet to fully bite. This winter will likely see more cost of living increases, rising inflation, and residents at further risk of eviction. Districts are therefore calling for the resources and measures to address this ahead of a difficult winter.

In a survey of district councils in England, 71% had seen an increase in homelessness acceptances in the last four months, being residents defined as homeless, or at severe risk of being homeless and needing assistance, with a quarter of those surveyed saying that this had increased dramatically.

The majority of councils have also seen people given emergency housing as part of the Everyone In scheme back in the homelessness cycle again, suggesting there is a risk of the work done by the Government and councils to protect the most in need during the pandemic being lost. The survey found that 70% of councils had seen a rise in families in particular needing support, including help with obtaining food and essentials, managing debts, and advice and support in seeking accommodation.

Councils are concerned that these increased challenges could be compounded by a drop in the availability of private rented accommodation, with three quarters of councils citing large numbers of landlords selling up due to the pandemic as adding to pressure on local housing supply.

As the District Councils Network, who represent district councils in England, meet for their annual conference they are calling for the Government to directly fund the tools housing and benefits teams need to tackle the likely rise in homelessness this winter.

The survey also found that:

Cllr Phil King, DCN Better Lives spokesperson said: “The findings of this survey reveal the stark impact the pandemic and the ending of emergency support measures continues to have on households across the country.

“During the pandemic, councils and the Government worked together to help protect those who are most vulnerable through the Everyone In initiative, the temporary banning of no-fault evictions, and other measures such as furlough and the Universal Credit uplift.

“However, as this survey shows, we risk much of this work being undone, with those who benefitted from this support becoming homeless once again.

“We need to urgently tackle this rise in homelessness by permanently lifting housing benefit for tenants in private rented housing, and increasing funding for councils in the upcoming spending review to provide a preventative safety net for those in need, and support to invest in a renaissance of council housebuilding to create homes, jobs and growth.”

0 0 0 0
Previous : Grant UK | The drive to decarbonise
Next : Sustainable Homes and Buildings Coalition launches first report into decarbonising heat options in the UK