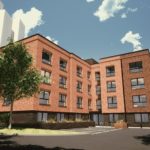 Work to build 36 new affordable rent council apartments has started in Clifton, after Nottingham City Homes was granted planning to build the one-bedroom apartments on the site of the former Southchurch garages, off Hamilton Court.

The apartments are also being named after a popular 20-year-old Clifton soldier who tragically died in the line of duty nearly 10 years ago. Kieron Hill died following an explosion in Afghanistan in May 2009 after serving in the Armed Forces since the age of 16.

The new apartments will have a special dedication to Kieron and will be known as Kieron Hill Court. Kieron’s mum Vicki Holmes, said: “When I got the call that they were calling the flats Kieron Hill Court, I was chuffed to bits. I actually cried my eyes out as it’s such an honour and I was just elated really.

“Because of his Clifton roots, it was great knowing that these local flats were going to be named after him. As his mum, the more I can do to keep his memory alive the better. People will see the flats and in years to come they will still talk about him.”

East Midlands based GEDA Construction has been awarded the contract to build this latest Building a Better Nottingham development. Halsall Lloyd Partnership Architects have designed the site.

Cllr Linda Woodings, Portfolio Holder for Planning, Housing and Heritage at Nottingham City Council, said: “We’re really proud to be able to name this development after a local man who tragically lost his life after serving in the Armed Forces.

“Nottingham needs a mix of all different types of housing and due to the high demand for homes for singles and couples in Clifton, these one-bedroom apartments for affordable rent will help meet the needs of local people waiting for a home.

“Building, warm, safe, and energy-efficient new homes, not only regenerates sites which are no longer fit for purpose, but also encourages investment, creates jobs and helps to support local supply chain businesses, which continues to be an important part of Nottingham’s Covid-19 recovery”.

Nick Murphy, the Chief Executive of Nottingham City Homes, said: “It’s great to be starting on site this week and working towards transforming this unused site into affordable rent apartments. We are creating homes that Clifton residents can be proud to live in.

“There is significant demand for council housing and we are working with the council to create these apartments to try and meet some of this demand. We will create safe, modern, energy-efficient and affordable homes for local people.

“Plus, it really is our honour and pleasure to name this new development after Kieron, who called Clifton home and was such a popular young man in the area until his tragic death.”

Colm McVeigh, Commercial Manager at GEDA Construction, commented: “It’s great to finally break ground on this project and provide much needed affordable apartments in the Clifton area. We have been working in partnership with NCC and NCH to provide a comfortable and efficient apartment scheme. It is also a fitting tribute to name the complex after Kieron, a dedicated person to the Clifton area and we are pleased to be associated with the naming of the scheme after Kieron, who lost his life in such tragic circumstances.”