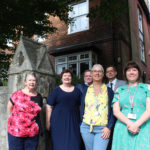 Five years after Ashford Borough Council launched an innovative project that has succeeded in benefitting homeless households and saved local taxpayers money, it has unveiled a second scheme that is expected to build on that success.

Christchurch House was a rundown property bought at auction for £278,000 by the council in December 2013. It was transformed into good quality short-stay accommodation for people to whom the council has a homeless duty or who have a case under assessment.

The initiative has been so successful — the money saved on placing homeless people in costly B&Bs meant that Christchurch House paid for itself in less than four years — that a second disused property has now been bought and renovation work starts soon to convert it into more short stay accommodation to help homeless people in the town. The building, 112 Beaver Road, is close to Christchurch House and was formerly used to house clergy from the neighbouring Christ Church South Ashford.

The authority has bought it for £430,000 from the Church of England and will invest around £500,000 to convert it into eight homes, capable of accommodating up to 25 people. A 26-week refurbishment programme will see facilities like a communal kitchen, dining room and laundry room added. The large property will have an enclosed and paved rear garden and is expected to share parking space with the nearby Christchurch House.

Ashford Borough Council’s Head of Housing Sharon Williams said: “I’m delighted that we have completed the purchase of 112 Beaver Road, which will be renamed in due course. Following its refurbishment, I’m hopeful we can open before the end of the year.

“Officers have worked diligently to secure ownership of the property, which will provide an additional eight units of good quality short stay accommodation that will benefit people who need our help, while also representing a worthwhile investment for the council.”

Cllr Bill Barrett said tackling homelessness was a huge priority for him following his recent appointment as the new portfolio holder for housing. He said both the prevention of homelessness and using the borough council’s own stock to house homeless people, rather than using costly private B&Bs, made financial sense.

Bill said: “Following the blueprint of Christchurch House represents a win-win strategy. For five years it has offered households a better solution than the upheaval of living out of a B&B. It is also good news that the council has saved considerable sums of money it would have had to pay in B&B costs. Of course, homelessness is not something specific to Ashford, but what sets us apart as an authority is the proactive approach we take to housing projects.

“Our can-do attitude has once again resulted in a scheme that is making a positive difference to those who need our support while at the same representing a cost-effective solution for the local taxpayer.”

Ward Member Cllr Jenny Webb said: “The building in Beaver Road has not been occupied for some time and is in need of some TLC to bring it back into use. I’m very pleased to hear that it will now be refurbished and transformed into such a worthwhile facility.”

Pictured above outside the building on 112 Beaver Road is Portfolio Holder for Housing Cllr Bill Barrett (second right) together with (from left to right) Cllr Jenny Webb, Head of Housing Sharon Williams, and Housing Officers Ray O’Shea, Donna Michael and Ellen Black.