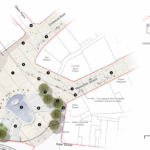 Birmingham City Council reveals plans for a £25m regeneration of the city centre – which include bringing Victoria Square’s famous ‘Floozie in the Jacuzzi’ fountain back into use.

Proposals to improve the city centre as it prepares to welcome around half a million more visitors to the city during the Birmingham 2022 Commonwealth Games will be discussed at Cabinet on 29th October.

The multi-million improvements to public spaces in the city centre, set out in the report, will include:

Public realm assets and areas around the city centre are in need of improvement, and as such these proposals will help create a gateway to the Commonwealth Games, providing a lasting legacy for Birmingham by creating a place that will enhance the city centre visitor experience, support retail business and a cleaner environment.

Over a million tickets will be sold to those who attend Commonwealth Games events in Birmingham and across the West Midlands in 2022, with more than 447,000[1] more people expected to visit the city during Games time.

Cllr Ian Ward, Leader of Birmingham City Council, said: “Our city centre welcomes more than 42 million people a year, and following the regeneration works around Centenary Square and Paradise, it’s now time for us to revitalise the business and retail areas.

“Birmingham 2022 provides us with an opportunity to bring forward these improvements and these exciting plans will ensure we can offer a world-class welcome to all for the Commonwealth Games – and beyond.”

The works programme will also include permanent hostile vehicle security (HVM) measures as part of a comprehensive safety and security strategy for the city centre, which through this project will be integrated into the street scene, replacing temporary measures that have been in situ for several years.

Funding of £5m has already been secured as part of the Government’s Transforming Cities Fund. Further funding of £5m is being sought from a capital budget for public realm that is part of the overall Commonwealth Games budget, confirmed earlier this year as being a £778m investment into the city and region. Revenue generated by the Birmingham Clean Air Zone project has also been identified as a funding source for this city centre improvement scheme.

0 0 0 0
Previous : New affordable homes to be built in the heart of Watford
Next : Allegion | Fire safety compliance