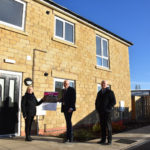 The final council house in a four-year building project has been completed and handed over to Bolsover District Council.

The Council, in partnership with Robert Woodhead embarked on the £14.7m programme in 2015 to build over 100 high quality, energy-efficient homes.

Fourteen sites in total have been built on across the District from South Normanton to Clowne and Blackwell to Shirebrook.

The final site, started in 2019 at The Paddock in Bolsover, saw 12 new flats and landscaped open spaces mark the end of the four-year new-build programme.

Bolsover District Council’s Cabinet Member for Housing, Councillor Sandra Peake said: “Unveiling these 12 lovely flats in Bolsover makes all the hard work and effort worthwhile. We have had some challenges and head scratching moments along the way, but with the support and expertise of Robert Woodhead Ltd, we always knew we would achieve our target.”

The first spade hit the ground at Rogers Avenue in Creswell on 28th November 2015, where seven properties where built on an old garage site.

Throughout the life of the contract, the programme has brought many pockets of land that attracted anti-social behaviour back into use. The former Blackwell Hotel Site which contained asbestos, Japanese Knotweed and was an eyesore, saw six new high quality family homes built to help meet local housing need.

Hill Top in Shirebrook was the largest development. 37 new homes now occupy the 3.5 acre site which had lain dormant for many years and is one of the steepest sites in the District, with a 22m incline from front to back.

Over the course of the programme, together with contractors Robert Woodhead Ltd, the Council overcame many challenges to deliver this award winning housing programme.

Councillor Peake added: “The key was to make sure we not only achieved it, but we provided high quality, sustainable homes that met our local community’s needs and we have certainly done that.

“Some said we would never achieve it, others said it was too ambitious. But we did it. And not only did we do it, we are expanding on the scheme and planning to build up to another 400 council properties over the next four years.”

76% of the total budget spent within a twenty-mile radius from sites, pumping millions of pounds back into the local economy.

Over 5,600 young people engaged in the programme, enabling them to learn about the construction industry and eight apprentices benefited after they started their journey in the industry, attending 110 training events, boosting skills across Bolsover District.

Glenn Slater, Chief Visionary Officer from Robert Woodhead said: “It’s been a big team effort to complete the programme. Bolsover District Council must be commended for their progressive and positive partnership approach that has raised the standards of housing, delivered skills and training and boosted the local economy.”

“I would like to thank everyone one of our employees, the supply chain, the education providers, the procurement team at EEM and the local communities who have worked with us during the programme. It is truly something we can all be proud when we reflect on an inspirational programme that will provide a wide reaching legacy for generations.”

After a robust procurement exercise by the Council, Robert Woodhead have embarked on a new £36+ million Bolsover Homes programme which will see up to 400 new Council properties over the next four years. This has already started at Whitwell with construction of sixteen homes on four sites.