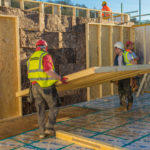 Cardiff Community Housing Association is experiencing the benefits of timber frame construction on its latest development in Cardiff Bay. LABM has all the details

It’s no secret that the skills shortage has reached a record high since records began a decade ago. The Chartered Institute of Building has declared that currently, the industry will need to find 157,000 new recruits to keep up with demand. It’s therefore, no coincidence that the UK labour shortage is coinciding with the rising interest in offsite construction. At the start of the year, the Federation of Master Builders reported that the shortage of bricklayers increased by 10% in just three months.

Timber frame enables a rapid build; managed properly, the build is not adversely affected by inclement weather. A typical three- to four-bed timber frame house can be erected in as little as a week. With efficient programming, follow-on trades can be making the building weathertight by installing roofing membranes, windows and doors within a comparatively short period of time.

Such benefits were an influencing factor behind the decision to select timber frame construction for Schooner Way, a development by Morganstone, working in partnership with Cardiff Community Housing Association (CCHA). Comprising 32 two and three-storey houses and an apartment block, the development in Cardiff Bay is dockside, overlooking Bute East Dock.

The Llanelli-based construction company worked with the housing association to obtain planning approval before securing the contract through competitive tender.

John Durkan, Head of Commercial at Morganstone, says: “On top of the speed of construction and the early commencement of internal trades, the appointment of a quality timber frame contractor assists in the accuracy and quality of the overall build, thus providing a better product for our clients and, ultimately the occupants of the properties, with the added benefit of reduced heating bills. With an ever-increasing shortage of good quality trades within the construction industry, the benefits of utilising offsite manufacture, such as timber frame, are growing and help to achieve programme delivery as well as improved ecological and thermal performance.

Taylor Lane Timber Frame was appointed timber frame contractor through competitive tender. “We had worked with them [Taylor Lane] previously and were happy to continue that relationship knowing the quality of the frame and the service that we would receive,” continues John.

As a tried and trusted supplier, Taylor Lane manufactured and erected its standard 140mm timber frame system, comprising sole plates, floor and wall panels, and roof trusses. The timber frame kits for the 32 houses were completed in 20 weeks, erected by an approved Taylor Lane sub-contractor. In accordance with the contract, quiet deliveries were scheduled, to reduce noise and disturbance in the largely residential area.

The project and erectors were managed by Taylor Lane Contracts Manager, Duane Morris, supported by an office-based Project Manager. Duane attended weekly progress meetings with Morganstone. In his site-based role, Duane is responsible for snagging, sign-off and dealing with site issues. He ensures the right product is with the right people, at the right time.

The site required a collaborative and proactive relationship between main contractor and timber frame supplier; Morganstone constructed a light steel frame apartment block at the bottom of the site while Taylor Lane erected the houses. It was also a very prominent build as the site was adjacent to the Cardiff County Council offices.

Morganstone had several challenges during the build, all of which were overcome. Japanese knotweed was removed by a specialist contractor, a piled foundation solution helped overcome contaminated ground and the proximity of neighbours was managed through regular liaison and communication, including letter drops, newsletters and community events.

Earlier this year, figures in a government report revealed that two-and-a-half-million families (in England) were unable to pay their heating bills without falling below the poverty line in 2016 — an increase of 69,000 on the previous year. Thermal performance is a recognised benefit of timber frame construction. Manufacturing timber frame homes that are lower energy and more thermally efficient is becoming easier and easier which is better for the environment and ultimately, good for residents’ pockets.

“Cardiff Community Housing Association is committed to providing energy-efficient homes to its tenants,” says Caroline Lewis, Development Director at CCHA. “Energy efficiency helps to tackle fuel poverty by reducing monthly utility bills. “The development at Schooner Way, nestled between Cardiff City Centre and Cardiff Bay provides the perfect location for sustainable living. Combined with energy efficiency the properties will be some of the most sought after in the City.”

Since completing Schooner Way, Morganstone has continued to work with Taylor Lane on subsequent projects as a preferred timber frame contractor.