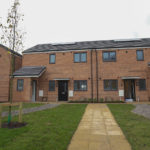 Stonewater | Working together to transform lives 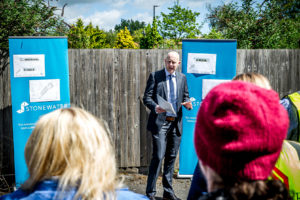 Matt Crucefix, Director of Development (South and West) at social housing provider Stonewater, explores the importance of strong partnerships and a commitment to social value in order to support people who are most in need.

In a tough economic climate, where housing providers have to take an increasingly commercial approach to the way they work, it is inspiring to be reminded of the social purpose that drives what we do. This was powerfully brought home to me when we recently completed an innovative self-build community project which has transformed the lives of armed forces veterans in Herefordshire.

Six veterans worked alongside our local contractor, gaining construction skills, training and experience as they built their own homes.

The Noden’s Mews development, in Leominster, is the first time Stonewater has been involved in such an initiative — and it’s been a fascinating learning curve, not without its challenges but ultimately hugely rewarding.

Working with Herefordshire Council, Alabare and contractor Harper Group Construction, we have built 19 high quality affordable homes on the former site of a 16-flat Stonewater scheme built in the 1970s.

Taking over four years to deliver, collaboration has been key to its success. The project has involved developing strong partnerships with the local planning authority, self-build specialists, armed forces charities and our contractors — as well as winning the local community’s support.

Working with a local and accommodating contractor that understands and cares about the project goals, rather than just completing the project within budget has been pivotal. In fact it has depended on all partners demonstrating commitment to a shared vision, flexibility and willingness to go the extra mile.

This was also evidenced when the council, appreciating the social value it would bring, sold us a neighbouring plot of land to include in the development for a nominal £1.

Overcoming challenges
Many veterans struggle to adapt to civilian life and many suffer from physical and mental health issues, so it was important to provide the right training and support to keep the self-build participants engaged and focused.

Having begun construction in September 2019, we aimed for completion within a year. Then COVID-19 struck, with the challenges that brought for the building sector. But, again, by working flexibly and proactively with our partners, it only pushed back completion a few months — with residents moving into their new homes in time for Christmas.

It’s been a rollercoaster journey for us all, but this scheme’s far-reaching positive impact has been truly heart-warming.

Six veterans previously without appropriate, secure accommodation now have comfortable, lifetime homes. They have also made friends, become part of the local community and equipped themselves with valuable skills and qualifications to help them find long-term employment.

Being involved in this scheme has helped them get back on their feet, re-connect with their families, boosted their sense of self-worth and opened up opportunities for a fulfilling future.

One of the veterans described the project as ‘fantastic’. Last year he was sleeping rough, struggling with his health and had lost all hope. Now, he is looking forward to celebrating Christmas in his new home with his children and has high hopes that his new-found skills will result in a job that will allow him to support himself and his family.

To me, his story goes to the heart of what social housing providers are all about — building homes, creating communities and supporting people to re-build their lives. While such a scheme may not net huge financial rewards for the development partners, its social value is huge.

My hope is that this kind of project — and the positive outcomes it has achieved — will spur on other housing providers to seek out such innovative partnerships and embrace similar life-changing opportunities.