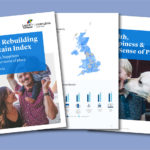 Following the announcement of Legal & General (L&G) and UCL Institute of Health Equity (IHE) entering into a four-year partnership to further the role of business in reducing inequalities in UK health, the latest findings published in the RBI demonstrates that more and better housing of all tenures will result in healthier and happier communities.

The RBI was established to measure the UK’s progress in levelling up on a quarterly basis, surveying 20,000 people annually and tracking social and economic progress across 52 measures, including Health and Social Care, Education, Housing, Jobs & Economic Prosperity, Environment, Energy, Transport and Digital.

The recent Levelling Up White Paper lists health among their 12 “core missions”. The research reveals the links between health and housing, with those in very good health achieving a Housing score of 63/100 compared to only 47/100 for those in very poor health.

With the White Paper making improvements to levels of happiness and life satisfaction within the population a key metric by which Levelling Up will be measured, L&G’s research also shows the clear link between wellbeing and housing.

However, the findings make clear the importance of housing on life satisfaction, happiness and place satisfaction:

Nigel Wilson, CEO at Legal & General, said: “For the first time since the inception of the Rebuilding Britain Index we now have a sense from Government on what they mean by levelling up the UK and how they intend to measure progress. The measures closely resemble those used within our own index, though also include long-term aspirational measures around happiness, life satisfaction, place satisfaction and levels of anxiety. However there are strong headwinds, with rising inflation especially driven by global energy and food prices. The relatively strong performance of our index on jobs and the economy may take a downward turn in future quarters.

“The Index is also very clear about housing: we need more and better housing for all types of tenure — build to sell, build to rent, affordable housing and later life living. Housing is an issue that can be tackled, especially if we use modern methods of construction to create climate-friendly homes to support people throughout their different life stages.

“Both for housing and for broader economic performance, all regions of the UK need a rapid increase in investment – into the very fabric of the country and into new and growing businesses creating high-productivity, high-pay jobs. The financial fire-power to invest to offset these headwinds exists, not least in our pension system: it needs to be used much more productively.

“Reducing health inequalities is a key part of levelling up. Our own data shows that the UK’s housing correlates with health and wellbeing outcomes. Better housing drives better health, and better health in turn creates a virtuous circle — those in very good health perform better across our entire index. The findings reinforce those from our recent Marmot Review in that there is a strong case for building health, literally a life or death issue, into an expanded “ESHG” framework to ensure it is better integrated into the way business and government address the issue.”