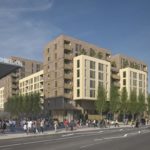 Housing Minister Kit Malthouse MP will today announce that the government’s housing accelerator, Homes England, and Barclays Bank have agreed £155.3 million of loan funding to accelerate the construction of hundreds of new homes in Wimbledon and Southampton.

The news will be announced today during the Housing Minister’s keynote speech at the Chartered Institute of Housing’s 2019 conference in Manchester.

The deals are the first to be agreed from the £1bn Housing Delivery Fund, which was announced by the Communities Secretary, Rt Hon James Brokenshire MP and former Barclays Chairman John McFarlane, in September last year.

In Wimbledon, a total of £150 million will be loaned to Merton Catalyst LLP, a joint venture between housing association Catalyst and developer Galliard. The funding will be used to help bring forward 604 apartments on the hybrid residential-led scheme at the former Wimbledon Greyhound Stadium site in Plough Lane. This sophisticated, mixed-use development will also include commercial space, improved public realm and a new sports stadium delivered by AFC Wimbledon.

In Southampton, Cannon Capital Developments will receive a £5.3 million loan to convert a former commercial building into 56 apartments for private sale in the city’s Ogle Road.

The Housing Delivery Fund was set up between the government and Barclays Corporate Banking to provide £1 billion of loan finance to open up the housing market and help small and medium-sized developers to deliver new homes across the country.

Minister of State for Housing, Kit Malthouse MP, said: “Upping our game to build more, better and faster is how we are going to meet our ambition of delivering 300,000 homes a year by the middle of the next decade.

“Innovations are key to unlocking the next generation of homes and our Housing Delivery Fund – a £1 billion partnership between Government and Barclays – is a great example of the new approaches we’re taking to get more homes out the starting blocks.

“Today I am announcing the first two deals from this partnership, worth £155 million, that will see sites developed into communities that people will be proud to call home.”

Sir Edward Lister, Chairman of Homes England, said: “We promised to form new, innovative partnerships to shake up the housing market and do things differently to accelerate the delivery of new homes across the country, and this partnership with Barclays is doing just that.

“This is a real milestone moment as we announce the first loan deals to come to fruition, which will see new housing be delivered in two areas where it is needed most.”

Dennis Watson, Head of Real Estate at Barclays Corporate Banking, said: “We recognised the need to get financing to smaller and medium-sized developers to help increase the number of quality homes being constructed. That’s why we set up the Housing Delivery Fund with Homes England – to ensure projects like this could become a reality. Hundreds of homes, including affordable housing, are now on their way but we know there is still more to do.