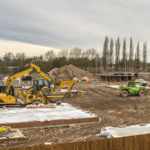 Research undertaken by the National Community Land Trust Network has revealed that a third of local authorities in England are now supporting community led housing development.

The information has been compiled following Freedom of Information requests to all councils in England in December 2018.

Despite central government forecasting that 300,000 properties need to be built each year until the mid-2020s, housing starts are falling short. And while local authorities will benefit from the lifting of the Housing Revenue Account borrowing cap, they are still facing an £8bn funding gap during the same period.

This research highlights some of the ways that local authorities are starting to embrace new community led solutions in an effort to get new homes built or bring properties back into use.

Examples from the data:

Community led housing is a way that people and communities can come together to solve their own housing challenges and provide high quality and affordable homes. The homes are managed or owned by the community in the way they want.

Funding available for community led housing is at record levels and includes the Government’s £163m Community Housing Fund. This followed a first year of the Fund (2016/17) when £60m was granted to 148 local authorities based in areas where the number of second homes is high.

“It’s fantastic to see that one-third of councils of all political colours have now used either policy, grants, loans or land disposals to help community projects to succeed. While some see this as a distraction or competition with their own housing plans, more are seeing how community led approaches can complement and strengthen other aspects of their housing strategy.”

Andrew George, Director at Cornwall Community Land Trust, said: “Putting the community in the driving seat not only helps to ensure we get the homes the community wants and needs, but they’re protected to benefit future generations in perpetuity too.

“Community led housing works. In Cornwall, over the past 10 years, 23 projects have developed 241 homes. We’re fortunate to have full backing from Cornwall Council. Without this, we would not be as successful as we are. From professional support to political backing and the availability of a £4m community Land Trust Revolving Loan Fund to bankroll the development phase. It makes a big difference to know the council is right behind what we’re doing.”