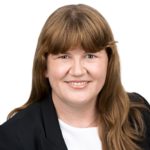 The national Social Housing team at law firm Clarke Willmott LLP has been recognised in the 2022 Legal 500 guide, which ranks the UK’s top lawyers and organisations.

The team maintained impressive Band 2 rankings across five of the Legal 500 regional areas; London, the South West, Wales, the North West and the South East, as well as a Band 3 ranking for the national Social Housing Finance team.

Partner Fraser MacRae who specialises in finance related matters, retained his ‘Hall of Fame’ status, the highest accolade given by the guide to individual lawyers. Also named was Lindsay Felstead, Joint Head of the Social Housing sector at Clarke Willmott, who appeared on the ‘Leading Individual’ list alongside Vicky Kells, also Joint Sector Head. Partner Kate Silverman was named as a ‘Next Generation Partner’ for her work with local authorities and registered providers.

Lindsay Felstead (pictured above) said: “We are delighted to have been featured so heavily in this year’s Legal 500 Guide, which recognises the top law firms and practitioners in the UK.

“The rankings are largely based on client feedback and demonstrate how our efficient, pragmatic and proactive approach is a real benefit to those we help. We’re particularly pleased to see the wider team recognised as
well as our people named individually on the list.

“We are very proud of the results and believe our rankings are a fitting testament to the high level of service we provide to clients.”