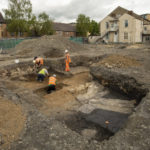 Build for the future, rediscover the past in Oxford

The development site is probably best known to current Oxford residents as that of former homeless hostel Lucy Faithfull House, built in the 1970s and demolished in 2018. However, an archaeological excavation carried out between April and June by MOLA (Museum of London Archaeology) uncovered evidence of Oxford’s medieval past.

Blackfriars
The Dominican Order (Blackfriars) first came to Oxford in 1221 and established their first friary near what is now Oxford Town Hall. Lucy Faithfull House sat on the site of the Blackfriars’ second friary, established in 1246 in what is now the St Ebbe’s area of Oxford.

This was an unusually large friary which functioned as a college — or Studium Generale — for the order, training students from across Europe in theology. It was also head of one of the four visitations into which the English province of Blackfriars was divided.

Like other monastic houses in Oxford, Blackfriars came into rapid and repeated conflict with the university. However, its death knell came with the dissolution of the monasteries by Henry VIII in 1538. Dismantling of the site began not long afterwards.

The Dominican influence in Oxford persisted beyond medieval times. While the Friars area did not survive the post-WW2 clearance and redevelopment of St Ebbe’s, evidence of the Blackfriars’ importance in Oxford still lives on in the street names of Friars Wharf, Preachers Lane and Blackfriars Road.

The Blackfriars did not return to Oxford until the 1920s, with Blackfriars Hall joining the University of Oxford as a permanent private hall in 1994. The new 36 flat development will reference the Blackfriars’ black and white coat of arms by using light and dark building materials throughout. 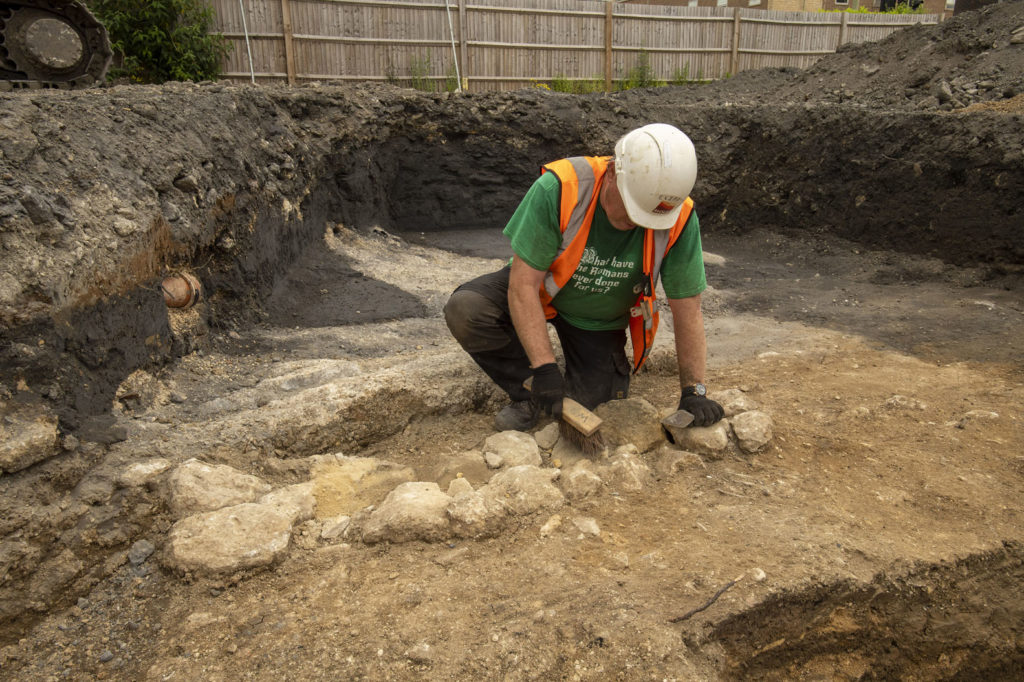 Excavation and findings
The excavations uncovered parts of the west range of the main cloister and the west end of the friary church, revealing sequences of external and internal walls and floors and nearby rubbish pits. Finds included fragments of moulded stone, a 13th or 14th century decorated floor tile from the cloister and painted glass from the west end of the church. A stone coffin was discovered west of the church, along with other burials in the northern part of the site.

The dig also yielded evidence of horn cores indicating the likely use of the site as a tannery after dissolution, as well as stone lined waste pits and pottery dumps belonging to the early 19th century housing that later occupied the site.

The excavation has now been backfilled. Once construction is underway the impact of the development on the remaining walls and waste pits will be reduced by careful foundation design, with the stone coffin and other burials protected below shallow ground beams.

Following analysis by MOLA specialists, artefacts recovered at the site will be donated to the Oxfordshire Museum for storage and potential display. The council hopes it may be possible for them to be put on temporary display at the Museum of Oxford after it reopens in September.

The building was used as supported accommodation for people experiencing rough sleeping until it was decommissioned by Oxfordshire County Council in 2015 as part of a round of funding cuts. When the hostel closed in February 2016, its 61 beds were replaced by 62 beds provided in shared houses across the city.

Oxford City Council acquired Lucy Faithfull House in 2017. As the building was in a bad state of repair and poorly configured for modern use, the council decided it was no longer viable as hostel accommodation and decided to redevelop the site for much-needed housing.

Demolition began in April 2018 and was completed that August. The 36 flats on the redeveloped site will be in a single block of four to six storeys, which will include 15 council homes let at social rent, eight shared ownership and three homes at affordable rent. The remaining 10 homes will be for market sale.

Lucy Faithfull herself was a social worker, children’s campaigner and founder of the Lucy Faithfull Foundation, a nationwide charity working to protect children from sexual abuse.

Joining Oxford City Council as a children’s officer in 1958, she was appointed as director of social services in 1970 and retired in 1974 as local government reorganisation put social care in the hands of a new tier of county councils. She was awarded an OBE in 1972 and became Baroness Faithfull of Wolvercote when she accepted a life peerage in 1976.

As Baroness Faithfull, she played a key role in the passage of the Children Act 1989 and later helped to set up the All-Party Parliamentary Group for Children. She also served as a trustee for a number of voluntary organisations, including Barnardo’s and the National Children’s Bureau. She died in 1996.

Councillor Alex Hollingsworth, Cabinet Member for Planning and Housing Delivery, said: “History is literally underfoot in Oxford and excavation on the Lucy Faithfull House site has yielded new insights into our city’s medieval past. The surviving archaeological remains will be protected below the flats for future generations to investigate with new techniques and new questions about Oxford’s rich medieval history.”

Oxford City Council Archaeologist, David Radford, commented: “The former Lucy Faithfull House proved to have been built on extensive modern foundations. Nevertheless, the area in the former courtyard proved to be well preserved and the work by MOLA has produced important new information. I am especially pleased about the details we have learnt about the internal layout of the west range of the friary, which certainly surpassed our initial expectations.”

MOLA Director of Developer Services, Sophie Jackson, said: “This year marks the 800th anniversary of the Blackfriars arriving in Oxford. It is an incredible privilege to be working on the site of the second Blackfriars friary, adding further detail to the story of this hugely influential building.”

0 0 0 0
Previous : Chubb | Are you ready for the shift to digital telecare?
Next : More than 1,000 people to learn retrofitting skills to help city-region achieve net zero future