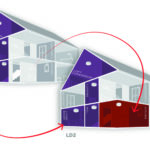 BS 5839-6 is the code of practice for the design, installation, commissioning and maintenance of fire detection and fire alarm systems in domestic premises. Since its introduction in 1995, BS 5839-6 has been adopted as standard practice in both existing dwellings and new-builds; its importance cannot be over emphasised.

A new version of BS 5839-6 was released on the 30th April, which has some major changes that will impact directly on specifiers in social housing. These changes relate to the Grades of alarms, which determine the type of alarm to be used, and the Category, which identifies the type/level of protection for each identified dwelling. 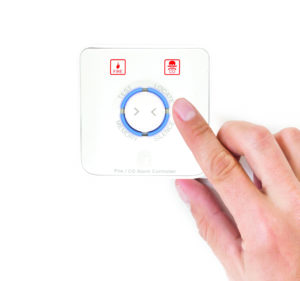 Changes to Grades
Under BS 5839-6, fire alarms are classified into Grades, from A to F. Grades B and E have been removed in 2019. Under the previous standard, Grade D required one or more interlinked mains powered smoke alarms (and heat alarms if required), each with an integral back-up supply; the back-up supply to be in the form of a rechargeable lithium or alkaline battery. Under the revised BS 5839-6, Grade D has been replaced with Grades D1 and D2, which differ in terms of the back-up power supply:

Whilst Grade D alarms feature most heavily in BS 5839-6:2019, Grade F systems also warrant mention here due to changes in Scottish legislation earlier this year, which permits their use. Grade F systems use battery only powered alarms. As with Grade D, Grade F has now been divided into F1 and F2 in the same fashion as that noted above.

Property types get new minimum levels of protection
Under BS 5839-6 different class of premises are identified and the minimum Grade of fire alarm system and Category of fire protection provided for that specific type of property are listed. It is here, in the 2019 revisions, that we have seen the biggest changes that will have a major impact on what type of fire alarms are fitted and where. In the main this is due to an increase in the Category of fire protection from LD3 where previously listed, which requires one mains powered optical alarm in the hallway and another upstairs on the landing, interconnected together, to Category LD2. LD2 involves additional alarm coverage, with a heat alarm in the kitchen and a further smoke alarm in the main living area; once again all interconnected.

This upgrade in fire protection is most notable in existing rental properties and Houses in Multiple Occupation (HMOs):

Other changes of note
Weekly alarm testing was previously recommended in BS 5839-6 but this has been changed to monthly (apart from Grade A systems). Recommendations contained within the NFCC Specialised Housing Guide regarding all fire detection, alarm and transmission/signalling to an Alarm Receiving Centre has been incorporated into BS 5839-6:2019, which is useful and recognises that valuable document.

Carbon monoxide alarms have been acknowledged for the first time in BS 5839-6 2019 as they are increasingly being installed alongside fire alarm systems or incorporated within them. BS 5839-6 states that mains powered carbon monoxide alarms conforming to BS EN 50291 and installed in compliance with BS EN 50292 may also be interlinked with the fire detection and alarm system if the manufacturer of all the components makes such a recommendation.

Implications for the future
BS 5839-6:2019 is a standard for fire detection and fire alarm systems in domestic premises, not a set of legal requirements; there is no penalty if a local authority chooses to ignore the standard and no date for ‘compliance’. However, the standard is considered best practice and those who choose to ignore it do so at their own risk. Certainly, social housing organisations place great emphasis on it and complying with it is regarded as essential. Many RSLs have been moving towards LD2 systems over the past year in the anticipation of the revisions and we are now witnessing a large number rewriting their alarm specifications accordingly and planning upgrade programmes.

With the 2019 revisions we have benefitted from greater clarity and, in a number of cases, an increase in the level of fire protection. Of course, with this comes a need for additional alarms per property, which has an associated cost, not just in alarm units but also installation. Some of this cost can be mitigated by using wireless alarm interconnection technology such as Aico’s RadioLINK+ and SmartLINK, and by using alarms that have been designed to be quick and easy to install.

With larger fire alarm systems comes issues over control and maintenance, as more alarms will need to be tested, plus it’s important to be able to locate the precise alarm that originally triggered. In these cases, an alarm controller should be considered (especially important if a carbon monoxide alarm is included in the system). These wall mounted devices feature test, silence and locate features, adding a very valuable extra measure of controllability to an LD2 system.

We’ve lived by BS 5839-6 for almost a quarter of a century and the standard has served us well; there’s no doubt they have helped save lives. BS 5839-6:2019 builds on the success of the original standard and, if adhered to properly, ensures greater safety and even better practice in the industry.