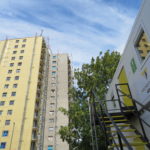 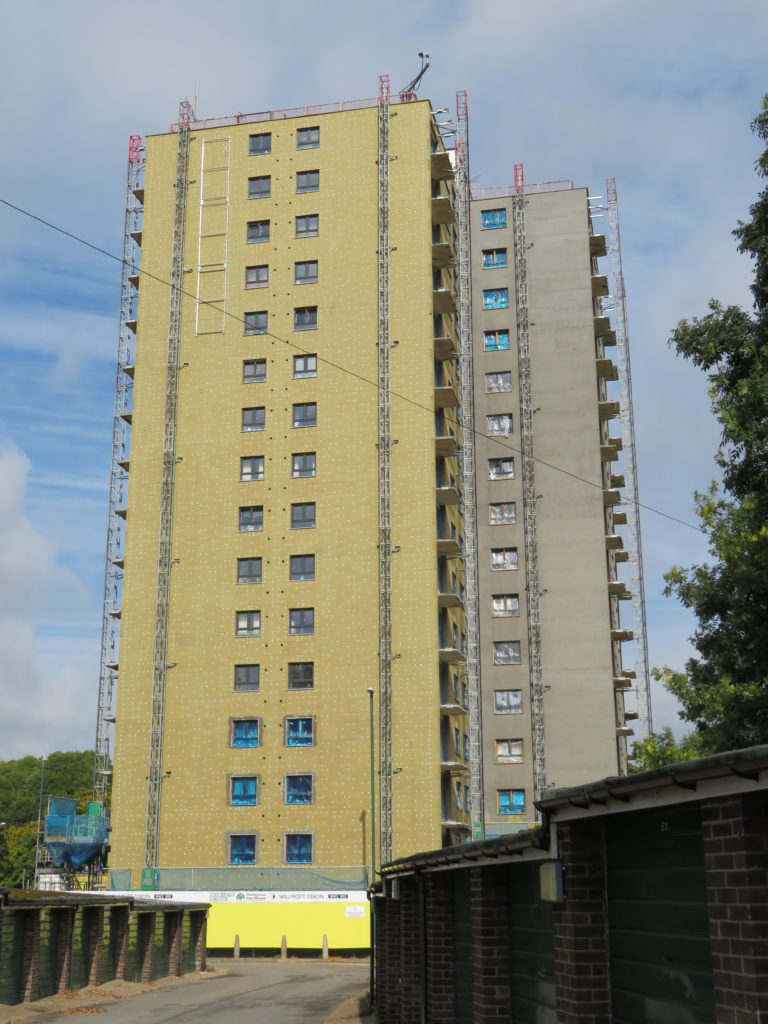 An £11m programme is underway to refurbish two 1960s tower blocks in the Sherwood district of Nottingham to make the properties more energy-efficient, aesthetically pleasing and safer for residents. As part of the project Nottingham City Homes is also creating a new extra care facility. Claire Clutten reports.

Luke Johnson, Project Manager for Nottingham City Homes, says: “The project was originally to renovate these two towers like we have with some of the other blocks NCH has in Nottingham – new insulation, reclad them, make them more energy-efficient and look pretty.”

Willmott Dixon is the main contractor delivering the project for NCH. Work began onsite in June 2017 and the project is due to complete in June 2019. The scheme is a mix of new-build and refurbishment. The existing apartments are all occupied and residents continue to live in the towers whilst the work is being carried out. A temporary building has been placed on site so residents can meet during the day and host activities such as their regular social club.

Between the two tower blocks there used to be a small community centre. As part of the project the building has been demolished. In its place, Willmott Dixon is building a new extra care facility, which will adjoin the two towers. The facility will feature 44 apartments as well as a host of communal facilities.

Luke continues: “This is quite a unique scheme in what we’re trying to achieve. In the middle there used to be a little community centre, it could fit about 30 to 40 people, very similar to the portable building currently onsite acting as a temporary community centre for residents. It was always the hub of the two towers, so originally we were going to build a new community centre. However, what NCH decided to do instead was put a new-build extra care facility in the middle, which is something that Nottingham doesn’t have many of.” 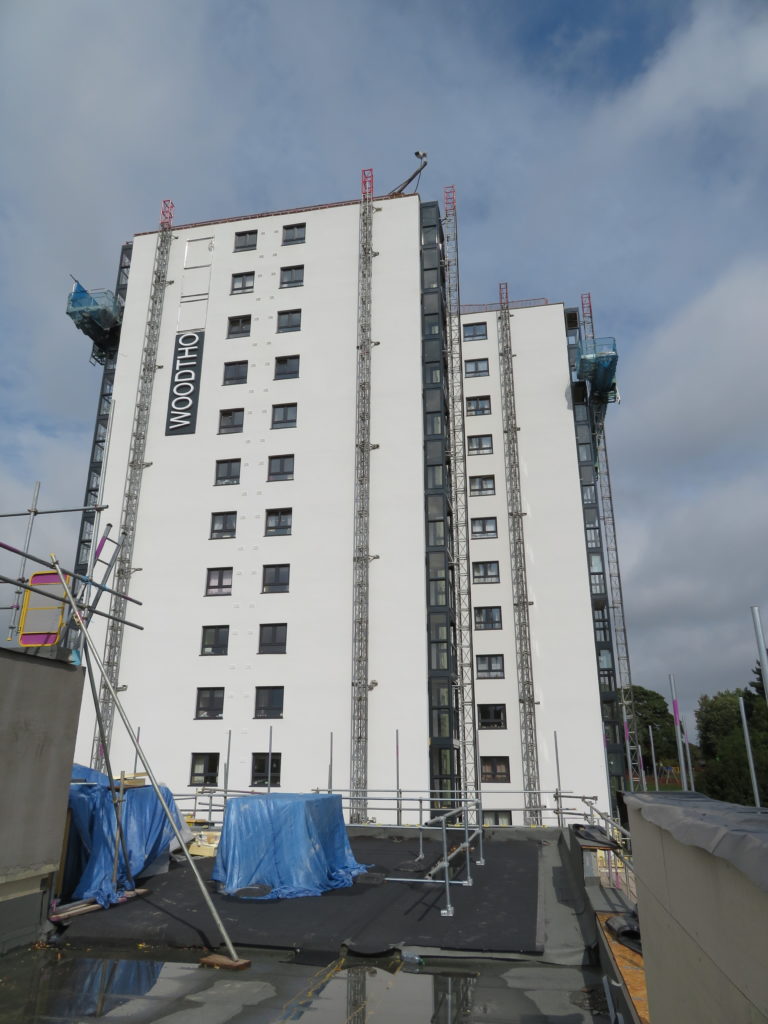 Some of the residents of Winchester and Woodthorpe Courts have lived in the towers for 20 years; have built up strong friendships and are part of a strong community. NCH wanted to provide a ‘next step’ accommodation so that when the time arises where residents require greater assistance, instead of having to transfer to a care home they can move into the extra care facility onsite.

Luke says: “This extra care facility allows them to move to somewhere that meets their needs but doesn’t necessarily take them out of the community they’ve built. It’s quite a nice scheme in that regard. The new-build in the middle will be designed for people who need some additional support requirements. It will have large communal spaces on every floor and a sky lounge with a view of the park which sits behind the towers.”

On 14th June 2017, the UK was shocked by the terrible Grenfell tragedy. Since the event, residents living in high-rise housing across the country have been understandably extremely concerned about the safety of their blocks.

Another challenge for NCH was the Bats that lived in the eaves of both buildings, above a small gap at the top where the cavity wall insulation didn’t quite reach. Bat boxes have been installed onto both blocks to accommodate them. “We’re on parkland so it’s to be expected,” says Luke. “When we went to knock the old community centre down we had Blue Tits living on it and had to wait for those guys to go first.”

The apartments in both blocks originally featured old style balconies with railings. These have been removed. In their place, Windoor’s enclosed balcony systems are being installed to increase the space and light in the properties and help boost the energy efficiency of the buildings. Luke says: “We did a lot of consultation with residents leading up to the project. They were a bit nervous about the enclosed balcony systems to start with, but we got a sample on site and the residents liked them. 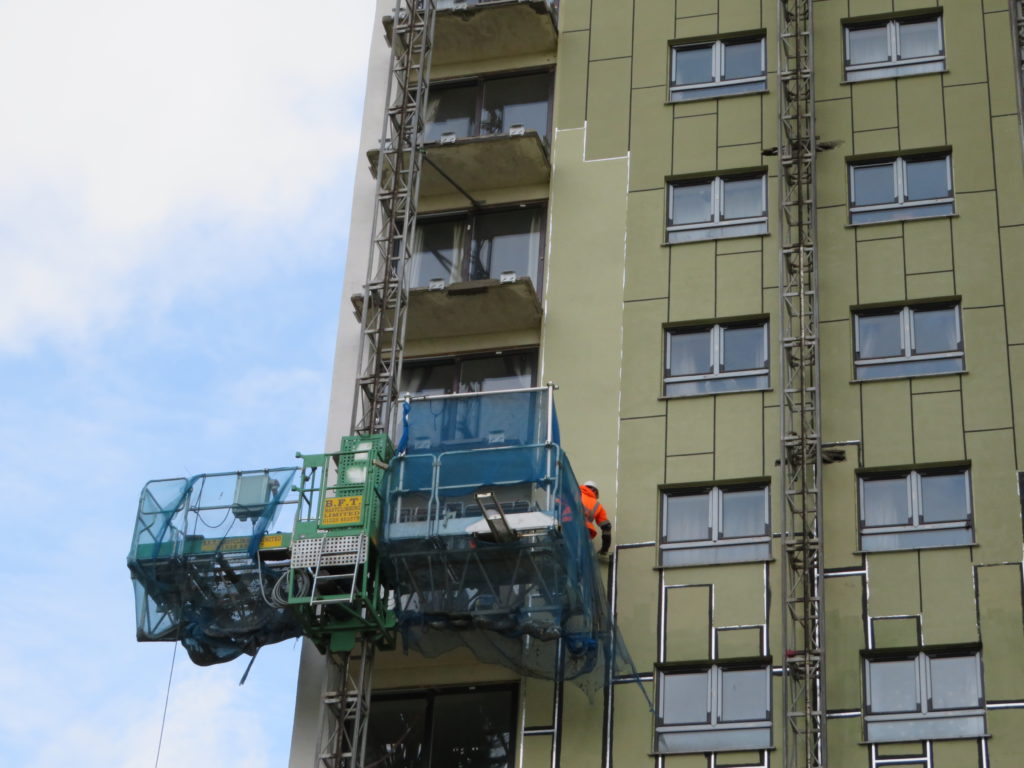 “The inside of the flats have been changed. The living rooms in each apartment face out onto either views of Sherwood or onto the park. What residents had originally was a window and then a door leading out onto the balcony. We’ve knocked all that out and replaced it with a patio door, which brings a lot of light into the property. It leads out onto an enclosed glass patio so it will look nice, and that was something the residents wanted and campaigned for quite hard for, so we had to put that into the specification.” 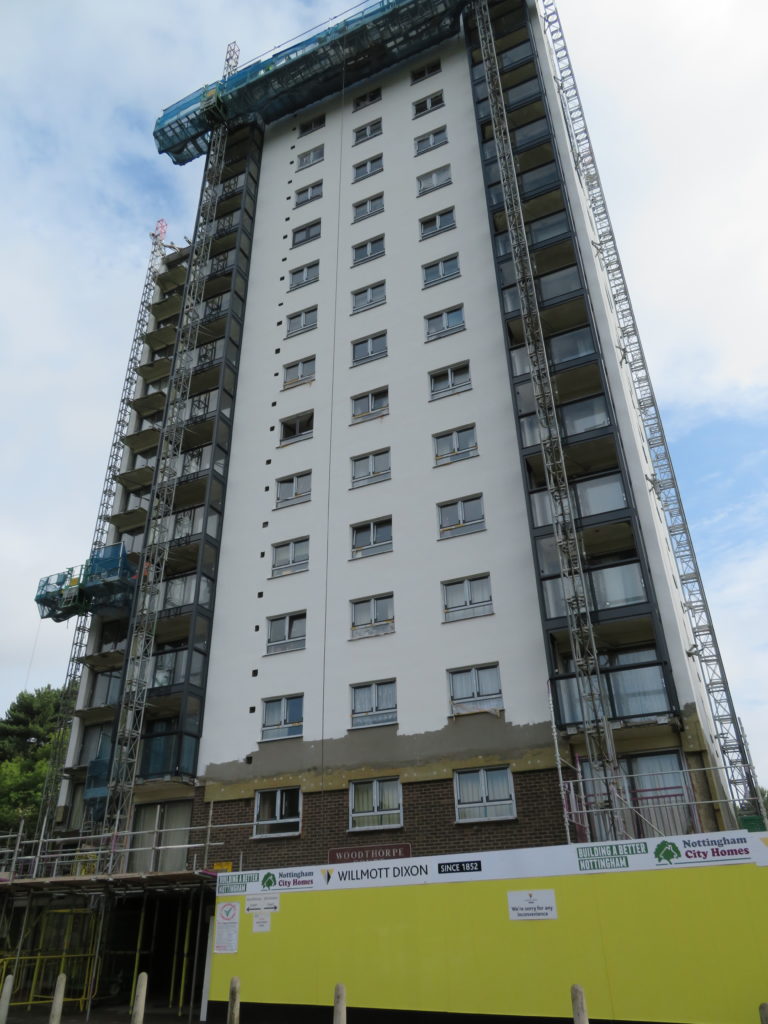 The overriding aim of the scheme is to make Winchester and Woodthorpe Courts more energy-efficient. To this end the render system on the external façade of the buildings has been upgraded to improve the thermal performance and new electric heating systems have been installed into all the flats.

The old storage heaters have been replaced with a modern equivalent that uses low-cost, off-peak energy to provide an economical off-peak electric heating system. It features intelligent controls, enabling heating requirements to be pre-set with a seven-day programmer. Following the installation of the new heating system the Energy Team visited and spoke to the residents, offering advice on obtaining the best energy tariff.

Luke says: “The plan at the moment is that some of the new flats in the extra care facility will be assessment flats and rooms for carers, rooms for assessing people’s needs to stay within that space or to have some respite. There will also be an assisted bathroom in there, a sky lounge and roof terrace overlooking the parkland.

“The ground floor communal room is going to be used as a big meeting space so everybody can congregate within one area and it will include a kitchenette, so residents will be able to have group meals. There will also be an IT suite on one of the floors. There’s quite a big knitting/craft club here, so one of the rooms will most likely be a craft room.”

On a project of this size, especially with tenants in situ, resident consultation is massively important. BIM level 2 has been used on the project not only to assess and review the building, but also to give residents an insight into what the scheme of work involves and how everything will look once complete. Using BIM also allowed the project team to make refinements along the way.

Some of the work has been quite invasive, for example in apartments where residents have inbuilt furniture which had to be deconstructed and rebuilt to accommodate the works. Luke says: “We’ve had to work with residents to gain access to flats for the heating and insulation works. We have a very good tenant liaison team on the job and surprisingly have had no issues with access.

“Willmott Dixon has been very good working around people’s needs and requirements. Because of the tenants we’re working with, we have carers and nurses coming backwards and forwards. We’ve had to work around them. It’s been a very positive experience working with the residents, which is probably one of the biggest risks on a project like this.”

Nottingham City Homes’ slogan is — ‘making places where people want to live’. Luke concludes: “We wanted to make the towers a nicer place to live, make them warmer. I think we’ve done that. The residents are very proud of their homes, because of that extra care was taken to make sure we didn’t do any damage. The location is brilliant and the views are fantastic, high-rise living isn’t for everybody but I think a lot of the people here do genuinely enjoy living here. “

0 0 0 0
Previous : SPECIAL REPORT: Offsite Housing
Next : Social Housing: Cap It All Off
Tweets by LABMmag