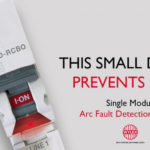 With over 13,000 electrical fires in the UK each year, leading circuit protection brand Wylex has launched a new, smaller Arc Fault Detection Device (AFDD) that disconnects the power supply when it detects a dangerous arc fault in a circuit.

Loose connections, damaged insulation, crushed cables, poorly made connections, frayed conductors, and deterioration of insulation materials that age over time can all lead to arc faults in electrical circuits. These are not detectable by MCBs or RCDs and are often not visible. If they remain undetected, they can cause overheating which can ignite nearby flammable materials.

The new mini AFDD, which has been built and tested to recognised quality and safety product standards, incorporates three products in a single module, a mini circuit breaker (MCB), a residual-current circuit breaker (RCD) and an and AFDD, providing overload, short circuit, earth leakage and arc fault detection. The product is also retro fit compatible, making it a quick and simple upgrade for existing installations.

According to government statistics, nearly a fifth (18%) of all primary fires (those that result in harm to people or damage to property) were caused by electrical distribution or appliances. Regulators have recently acknowledged the importance of AFDDs in helping to prevent such fires, by recommending their use in the 18th edition of the wiring regulation. In doing so, regulators are clearly stating that the device will provide significant safety improvements and ignoring the recommendations could mean that responsible individuals run the risk of being culpable if it’s found that fire could have been prevented by an AFDD.

Paul Fisher, Managing Director of Wylex said: “Safety must be a prime consideration for anyone with responsibility for properties and tenants. Whether you are designing or installing electrical installations, a device that can help prevent fire should be a priority.

“When it comes to electrical fires there is no room for complacency, even with newly installed appliances or after thorough investigations. There are numerous causes of arc faults, from DIY mishaps to the corrosion of cables over time.

“Our new mini AFDDs provide additional protection and give peace of mind. Their smaller size makes installation practical and easy, their combined functionality makes them extra effective and their quality features make them incredibly reliable.”