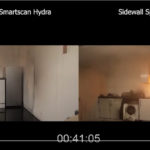 Tests show sprinklers can take a minute longer to activate

Testing undertaken by fire suppression specialist Plumis shows that sprinklers can take up to a minute longer than Automist to activate in response to certain fires.

In the latest detailed analysis of fires attended by fire and rescue services, published by the Home Office, figures show that cooking appliances were by far the largest ignition category for accidental dwelling fires and non-fatal casualties from accidental dwelling fires. Accounting for 48% of these fires and 51% of non-fatal casualties 2018-19.

To understand how better to tackle these types of incidents, Plumis conducted tests at the Burn Hall at the Fire Protection Association (FPA) to see how different fire suppression technologies measure up. From the testing, Plumis has published a video showing how sprinklers perform in comparison to Automist Smartscan against a challenging oil fire.

High-pressure water mist, as used in the Automist Smartscan, is highly effective in protecting people and their homes against fires caused by deep fat fryers, and is considered to be a more efficient and environmentally friendly alternative to sprinklers — using 10 times less water to achieve the same result.

“The Home Offices’ report shows that in 2018-19 there were 253 fire-related deaths with 77% of these occurring in dwellings and the majority of which, were caused by electrical equipment misuse, mainly cooking appliances,” said Yusuf Muhammad, Co-Founder of Plumis.

“With home cooking appliances, like chip pan fryers, being a common denominator in the cause of most accidental fires, we wanted to clearly show that there are faster systems available, which also cause less damage and can be used in most homes. When the Automist Smartscan detects a fire in a kitchen, it triggers a pump which drives mains water through the unique nozzle unit, quickly filling the room with dense fog, as shown in the video, which is able to suppress the blaze.

“While traditional thinking says that you should not use water to extinguish an oil fire, because bulk water sinks below the oil and boils, ejecting burning oil into the room, the very fine droplets produced by the Automist Smartscan are small enough to be carried by thermal air currents. This means that rather than sinking below the oil, they are drawn into the flame, successfully suppressing the fire directly.”

The testing follows a series of contract wins for Plumis with Lambeth Council to pilot its misting system in an array of housing schemes.