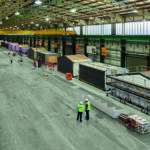 As modular construction could potentially be a key driver in carbon footprint reduction in the UK Development Sector, Louise Hinley, Senior Planner, Planning, Development and Regeneration at Lambert Smith Hampton provides an insight on how the modular housing trend is bringing in sustainable benefits that the sector should look out for.

According to the UK Green Building Council around 400 million tonnes of materials are used by the UK construction industry each year. New eco-friendly building techniques, such as modular construction, could play a key role in reducing the carbon footprint of the UK’s development sector and improving its sustainability credentials.

Modular versus traditional
Modular construction involves creating the property offsite in a factory. It is created in large chunks, which are then transported and put together on the construction site. While modular construction can be used to create whole neighbourhoods, it can also be used in the self-build industry. High-rise modular apartment blocks are also emerging across the UK, such as student accommodation block Apex House in Wembley — the tallest modular building in Europe.

Those in favour of modular construction cite many benefits to the technique. It can be much quicker than traditional construction, for example, particularly in terms of time on site, which reduces disruption to any neighbours. The 28-storey Apex House, for instance, took just a year to complete and, once on site, up to 11 prefabricated apartment units could be installed each day.

When buildings are produced in a factory, no time is lost due to bad weather. Constructing buildings in a factory creates less waste and quality control can be easier to maintain. Costs are generally lower, both in terms of reduced material use and reduced labour costs.

A growing trend
In November 2019, Homes England announced a £30m investment in modular homebuilder ilke Homes. This investment will allow ilke Homes to produce 2,000 homes by the end of this year, rising to 5,000 a year within the next five years, putting the company in the realm of the UK’s largest housebuilders.

This partnership is just one example of how modular construction is taking off across the UK. Small though sizeable developments are cropping up, such as 40 homes in the Icknield Port Loop scheme in Birmingham.

However, some sustainability benefits are yet to be tested. For example, the robust nature of each individual part of a building should, in theory, ensure a longer life for the building as a whole. The modular industry could provide opportunities for the reuse and recycling of components as it grows.

A further benefit is the opportunity for the UK to create factories to produce modular buildings. Producing buildings close to home will reduce carbon emissions that are often generated on large construction sites due to lorry traffic.

Affordable housing solution
There are a few factors that could hold back adoption of modular construction. Access to construction sites is one. As building components are large, they need to be craned into place, but this is not always possible in a restrained site within other properties. Another hurdle is that design cannot be amended easily once it has reached the factory. For a self-builder, it might be frustrating not to edit the overall design as construction takes place.

However, modular construction has been popular for many years now in countries such as Japan, Germany and Sweden. A report from analyst firm Frost and Sullivan predicts the global modular market to grow at a rate of 6.3% a year to reach $215bn by 2025.

While the UK has been slower to embrace the technique, publicity of existing schemes and the Government’s enthusiasm are accelerating its growth. Modular housing is seen as a potential solution to the UK’s affordable housing crisis, for example.

Header image shows the inside of the ilke Homes factory