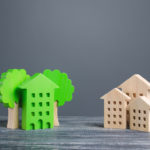 In May 2019, Parliament, with the support of MPs from all major parties, declared a climate emergency. Many local authorities have followed this lead by declaring their own climate emergencies. In June, a national target of net zero carbon emissions by 2050 was passed into law. Since homes contribute around 20% of greenhouse gas emissions in the UK, this has major implications for the design and construction of new homes, and for renovation and improvement of the existing stock.

So far, the Government has consulted on a new Future Homes Standard, to come into full effect in 2025. But even if the Government succeeds in increasing the annual output of new homes to 300,000 from 2025 on, these will represent barely a quarter of homes in England by 2050. To meet the zero-carbon target, bringing the existing stock — including the 1.6 million homes owned by local authorities — up to the necessary standard is the far bigger challenge.

Consultation on the Future Homes Standard asked for views on two options for immediate strengthening of the energy efficiency standards. The first would deliver an estimated 20% improvement on carbon dioxide emissions, predominantly through an increased fabric standard, with measures such as triple glazing and a wastewater heat recovery system. The second option — the Government’s preference — would aim for a higher improvement of 31% on emissions through less stringent increases in the fabric standard, but with a switch to low-carbon heating.

The 2018 Green Paper A New Deal for Social Housing proposed a new Decent Homes Standard for local authority and housing association homes, including the expectation that all dwellings would be improved to EPC Band C by 2030 at the latest. ARCH welcomed this proposal, while pointing out the resource implications.

Figures from the Energy Saving trust suggest that only 55% of social rented homes currently meet EPC Band C or above, so meeting this standard alone will require major investment. And there are tensions between energy-efficiency and fire safety as this standard may be difficult to achieve in high-rise buildings without cladding.

Much has happened in the 18 months since the Green Paper was published, not least the adoption of the zero carbon target. At the time of the Queen’s Speech, the Government promised a White Paper to take forward its agenda for social housing. When this is published, it is likely to include more detail on the new Decent Homes Standard. But it needs also to look beyond the next 10 years and begin to spell out how this contributes to the longer-term objective of meeting the Future Homes Standard, or its equivalent, by 2050 — which is less than 30 years away. Not least, it needs to initiate a full discussion on the transition to lower-carbon heating in the social housing stock.

The HRA self-financing settlement in 2012 was intended to free local authorities from the treadmill of an annual subsidy calculation to enable them to draw up 30-year business plans for maintenance and improvement of their housing. In an ideal world, business plans would already have factored in all-important investment needs within that 30-year horizon, including those needed to meet carbon-reduction targets. In this far-from ideal world, the least we should expect is early action by Government to clarify what standards should apply to the social housing stock so that plans to meet them can be firmed up and implemented.