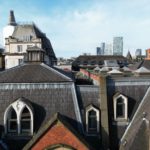 Anthony Carter at Drone Site Surveys Ltd discusses the use of drone technology to inspect property portfolios and the differences between drone surveys and inspections.

Using drones, allows local authorities and housing associations to view every detail of their assets from angles that are inaccessible with traditional inspection methods. The use of drones as an inspection method is on the increase as the speed and quality of which they can inspect is improving workflow and changing the face of the construction and maintenance industry.

Inspections form a vital part of both reactive and proactive maintenance, so it’s important that they don’t spiral in costs and can be done on a regular basis. Not only that, ensuring inspections can be carried out safely is of vital importance.

There are various benefits to using drones as part of the property inspection process. Here are just a few of them:

Safety: No longer do you need to send teams up on ropes, platforms or scaffolding. A drone pilot works from the ground and flies at heights up to 400 feet with no restrictions, however a lot higher can be achieved as long as permission is sought for the flight from relevant authorities.

Speed: A drone pilot fly the drone, take all the photos needed, upload them and send them to the relevant asset management team members in less than 24 hours. Not only that, it’s also possible to connect a virtual reality headset so that your team can view the flight and ask pilots to capture closer looks as and when required during the flight.

Cost: Traditional inspection methods require some kind of access to the top of your assets. This may mean the expensive hire of a cherry picker, scaffolding or other platform access. On top of this, these may also require extra permissions, such as road closures, which can all come at cost from local authorities. A drone pilot works from the ground and does not need any expensive equipment hire.

As an example of the benefits of using drones, we completed a large number of roof inspections for a client who would traditionally budget year one for inspection, year two for repairs. However, we completed 70 roof inspections using drones for less than the cost of traditionally inspecting just one roof using scaffolding. This meant the client could not only inspect all of their assets, but they could also complete all the repairs in year one.

Drone surveys and drone inspections
At Drone Site Surveys, we are commonly asked to perform both a drone survey and a drone inspection. It’s important to understand the differences between the two when choosing what’s needed for a local authority or housing association asset inspection.

Drone Inspection: This is a flight that will provide an in-depth set of photographs and video (if required) of your assets. We provide all photos in full HD and 4K where possible. All footage is provided for you and your team to analyse and come to your own conclusions of the condition or any repairs that may be needed.

Drone Survey: While we will provide the images and video as set out in a drone inspection, a survey also involves a report from our building surveyors. They include our findings in a written report to be shared with potential repair companies or for you to hold for your records.

Drone Survey with RICS Report: A report from a RICS surveyor can also be provided along with our footage. A RICS accredited report allows you to have a written document to help show failings in your assets, which can then be shared with insurance companies if necessary.

When employing a drone company to complete an inspection or a survey it’s important to know the difference.

Drone Site Surveys are also qualified thermographers and can carry out thermal surveys to help councils and housing associations identify parts of properties that are loosing too much heat, as well as spot areas of a roof that may have failed allowing heat to escape. The company can also provide construction site surveys and monitoring and conduct stockpile measuring using advanced photogrammetry software with a high level of accuracy.