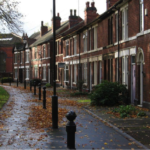 Back to the future? Rethinking terraced housing

Political parties of all stripes are vowing to ‘tackle the housing crisis’ and make Britain carbon neutral in the coming decades. This could radically change how we build and live in our homes in the future. Or perhaps not. Jon Milhouse, Director at Planning & Design Practice, believes that terraced housing could be the key to meeting this challenge.

Good ideas have a habit of coming back around. At the turn of the twentieth century, the most popular form of house building was terraced housing. As a concept, it was simple, yet effective. It didn’t require much land take, yet each household was usually allocated a decent amount of internal accommodation, and a garden. There was typically a shop on the corner of every street, or a pub; schools and places of work usually within walking distance. People travelled further afield by bicycle or tram.

Later in the twentieth century, as cars became the dominant mode of transport and the aspiration for most families, our built environment changed too. Rows of terraced houses were swept away to accommodate new roads. Those terraced streets which did survive became car-dominated. Those who could afford to often moved in the suburbs, or better still, the countryside, relying on the private motor car to serve their needs. The type of housing we began to build, and continue to build to this day, is designed around the car; low density detached housing with driveways and garages.

As we face up to the challenges of tackling climate change, and building enough houses to accommodate our population without having to pave over our treasured countryside, reverting to terraced housing once again, but in a manner fit for the twenty first century, could be a big part of the solution. Many aspects of that original urban form suit our needs today. Having only two (narrow) walls exposed to the outside world rather than four, significantly reduces heat loss. The higher densities enabled mean we can create walkable and cyclable neighbourhoods, reducing our reliance on the car. Small convenience food stores, micropubs and trams are all coming back into fashion. Fewer cars mean quieter streets, where children can play, and residents can interact, helping to address the increased problem of social isolation. It also means more exercise, which is good for our physical and mental health, particularly if supplemented with public open space in close proximity, offering opportunities for recreation, biodiversity and trees to help with carbon capture, urban cooling and flood resilience.

None of these ideas are new, none of this is rocket science. It is merely common sense. We shouldn’t assume that modern problems require a revolutionary, technological solution. Much can be learned from the past.

But neither should we assume that in re-adopting a house type of the past, we have to accept its historic limitations. Modern terraced housing can be better insulated, better lit and more spacious than its predecessors. We can generate heat and power through microgeneration, rather than coal. With such mod-cons, terraced houses can once again become the kind of property that developers want to build, and that people want to live in.

Jon is both a Chartered Town Planner and a Member of the Institute of Historic Building Conservation. He can be contacted at jon.millhouse@planningdesign.co.uk or via telephone on 01332 347371.