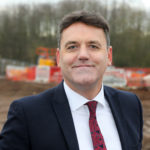 Housing association Your Housing Group has selected the North West region of Lovell Partnerships to join its four-year framework and act as a key delivery partner in realising its ambitious vision of building 600 homes per year.

Lovell Partnerships is just one of two partners appointed by Your Housing Group to deliver new-build properties through a framework agreement with an estimated value of £200m. The Lovell Partnerships team came out top during the tender process.

Richard Jones, Director of Growth for Your Housing Group, said: “Following a thorough procurement exercise, we are excited to be moving forward with Lovell Partnerships on our new ‘Development Partner’ framework, supporting our development programme for the next four years. It is another step forward in delivering our ambitious growth and construction plans to deliver affordable housing across the region, and this framework will enable us to work more strategically, efficiently and deliver the better outcomes.”

Lee Sale (pictured above), Regional Managing Director at Lovell Partnerships North West, said: “We’re delighted to have officially joined the Your Housing Group framework to support its drive to create much-needed homes in the region. This agreement also supports Lovell’s core commitment to providing social value to the region’s communities as well as realising the potential of unlocking land and regeneration sites.

“Our team is well positioned for this partnership having delivered over 1,500 new homes in East Manchester since 2002 including developments in Beswick and Openshaw; not to mention the 1,000-home regeneration scheme currently being completed at Miles Platting.”

Lovell Partnerships prides itself on being the first national housebuilder to implement an innovative placemaking partnership model 50 years ago and on its record of identifying and developing areas of decline, turning them into successful places where people want to live, and communities can grow. This approach saw the organisation pioneering residential developments such as the first residential development at Salford Quays in the 1980s while kickstarting the regeneration of East Manchester at the start of the 2000s through a design-led placemaking strategy.