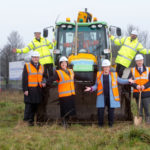 Work is officially underway to bring hundreds of new affordable homes to a key regeneration site in the heart of Glasgow’s southside. Regeneration specialist Urban Union, part of Robertson Group, will deliver 137 homes in Pollokshaws, at a location on Shawbridge Street formerly occupied by high-rise blocks.

Set to complete in 2023, Pollokshaws Living will offer a variety of different house types suitable to first time buyers and growing families alike. In addition to one- and two-bedroom apartments, the new development will include two, three, four and five-bedroom terraced homes.

The £25m plus project is a major milestone for Urban Union as it will be the first development which it will fully self-deliver and with all homes for private sale. The site forms part of the wider Transforming Communities: Glasgow programme that aims to regenerate eight key neighbourhoods across the city.

To mark the start of construction work, a ceremonial sod cutting took place on the 19th February on the site where the homes will be built over the next three years. Representatives from Urban Union and Glasgow City Council came together to commemorate this milestone.

Neil McKay, Managing Director of Urban Union, said: “It’s an exciting moment for the Urban Union team to officially launch our second project in Glasgow and help meet the ever-growing demand for high-quality, affordable homes in this thriving part of the city.

“We have successfully delivered hundreds of homes at our Laurieston Living development in the Gorbals area of the city and will be putting that award-winning experience to good use as we support the ongoing regeneration of Pollokshaws.

“It was a pleasure to welcome all of our partners down to the site today to mark the beginning of what I’m sure will be another successful regeneration story.”

Councillor Kenny McLean, City Convenor for Neighbourhoods, Housing and Public Realm at Glasgow City Council and Chair of Transforming Communities: Glasgow, commented: “While there is a great deal of housebuilding taking place across Glasgow now, this development at Pollokshaws is one of the most dramatic examples in Glasgow of an area being transformed through the creation of these 137 new homes. The different types of flats and houses that will be built will provide high-quality new homes for a wide range of people and families, contributing to the regeneration of the area. This is another example of the difference being made to neighbourhoods in the city by the partnership working of Transforming Communities: Glasgow.”