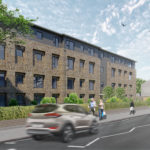 Work begins on Phase One of multiple airspace developments

Sutton Housing Society has begun work on the first of two phases of airspace development across the South West London Borough of Sutton, which will eventually see the social landlord increase its housing stock by over 30%.

Work has begun on the first block, Norman House (Elevation B shown above), which will see airspace increase the onsite housing density by 68%.

The new homes will be achieved by creatively unlocking site potential, and building new flats on top of existing dwellings, providing new affordable rent housing for people over the age of 55. The plans will also benefit the existing residents by modernising the fabric and appearance of 50 year old apartment blocks, including new communal spaces and lounges, and outdoor landscaping.

The work is being undertaken by two contractors, Spencer Francis, who will deliver the structural changes to the buildings, and modular specialists Go Modular, who will add the airspace dwellings.

“It was a bold move for a smaller landlord to submit five simultaneous planning applications last year. But we knew that we were going to have to think differently if we were to unlock the development potential of our existing schemes, and establish an ongoing development pipeline.”

Robin concludes: “When I was appointed Chief Executive of Sutton in 2018, I knew I would be leading a smaller landlord with no available traditional development sites, so I hope these projects are a useful demonstration of what can be achieved when you evaluate and take the right risks.

“It just shows that smaller landlords can mirror their larger colleagues and manage multiple projects consecutively to suit market or funding opportunities.”