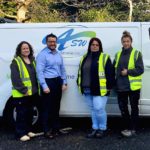 Women build new perception of roles in the construction industry

To coincide with the 12th annual National Apprenticeship Week, one Swansea company is keen to showcase the growing diversity and opportunities for women in a sector traditionally associated with men: construction.

While the latest official figures on apprenticeships (for 2016-2017) show that only 620 women entered the sector that year compared with more than 20,000 men, unofficial figures and anecdotal evidence paint a very different — and much more positive — picture.

According to construction careers website Go Construct, some 37% of new entrants into the construction sector coming from higher education are women; it also estimates that 14% of the total workforce in this sector are now female.

These statistics reflect the experience of ASW Property Services, a property services specialist covering Wales, the Midlands and the South-west of England, in recent years. ASW is keen to champion women leading on roles that were once traditionally filled by males. In recent years, multiple members of female staff at ASW have developed into such roles, such as site manager, skilled plasterer and plumber.

Kelly Martin was employed by ASW as On-site Administrator in September 2014, through Beyond Bricks and Mortar, an important initiative to secure community benefits from all suitable council activities in the City and County of Swansea for the lasting benefits of the community.

On her first day in the site office, Kelly dealt so effectively with a tenant’s queries of a difficult nature, that she was promoted to Tenant Liaison Officer (TLO), covering several sites across Swansea and Bridgend. In November 2015, she trained as a site supervisor, completing her Site Supervisors Safety Training Scheme course, carrying out this role as well as her TLO role.

On completion of her Site Management Safety Training Scheme course in September 2018, Kelly was promoted to Site Manager in November 2018. Since, Kelly has been running sites including work on chimneys, balconies and door voice entry — to name but a few.

Talking about her development and progression since working with ASW, Kelly commented: “I have really delved into the roles I have been given while working with ASW. I had no relative experience in these job roles before working here, so I appreciate how the company champions women working in such a traditionally heavily male dominated industry.

“Completing all of the training courses while maintaining my role has given me the expertise and experience I need to continue developing and progressing on this career path. It proves you do not have to be a male to succeed in the construction industry and I am living proof of that.”

Lisa Kostromin, Plasterer at ASW, completed a Level 1 Diploma in Plastering with NPTC College in 2016. Her second year involved working on site, where Cyfle Building Skills Shared Apprenticeship Scheme matched Lisa with ASW in 2017. Since, Lisa has completed her Level 2 NVQ qualification and took part in a Skills Build Event, where she competed with colleges in the region. Lisa went on to be a finalist in the Welsh regionals and was the only female plasterer in the competition. Lisa’s efforts won her the position of runner up for the South Wales region, competing against Level 3 contestants.

As a result, NPTC nominated Lisa for Student of the Year UK 2018, where Lisa secured second place. Lisa is now a multi-skilled plasterer on ASW’s contracts that involve kitchens and bathrooms. Driven by her successes, Lisa also learnt other trades while working on site with ASW and is determined to continue developing her skillset — with an aim to do supervisory in the future.

Lisa said: “I have always wanted to try my hand at plastering and I am so glad I did. I have reaped so many rewards from the qualifications and training I have received, and this will allow me to continue on my journey with ASW. Being successful in the awards I have been nominated in has given me the confidence to know that I can do whatever I put my mind to. I can’t wait to develop further skills and progress in my career with ASW.”

Jennifer Champion, who is multi-trade qualified, including working on plumbing projects (City and Guilds level 2 qualified), joined ASW in January 2018. ASW supported Jennifer while she undertook a multi- trade apprenticeship course and has since worked on various projects — including kitchens and bathrooms.

Jennifer is currently seeking further courses to embark on while working at ASW to qualify her to progress to quantity surveyor or site manager in the future, as part of her development path.

Jennifer commented: “I really enjoy working on projects that are traditionally undertook by male staff — for example, plumbing. I am now working to attain my level 3 qualification, while undertaking my daily roles at ASW. I’m excited as to where the future could lead for me — I have high aspirations of developing my career path to quantity surveyor or site manager and I know I am on the right path to get me there.”

Managing Director of ASW, Anthony Thomas, said: “Equality should be a priority in every business, and we strive to make sure the construction industry is no different. I am very passionate about helping female staff develop and progress into roles they have a drive for — and our female staff are absolutely fantastic. It is great to see the construction industry make way for gender equality — we still have a long way to go, but it’s heading in the right direction.”

Pictured above from left to right are: Lisa Kostromin, Anthony Thomas, Kelly Martin and Jennifer Champion.