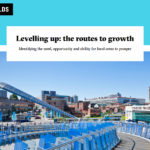 Where local areas can make the levelling up agenda work

Almost 100 days on from the launch of the Levelling Up White Paper, which laid the groundwork for the Levelling Up and Regeneration Bill, announced at the Queens Speech, and as Whitehall reflects on the outcome of local elections across the country, new research from Lichfields has identified how local authority areas can capitalise on the Government’s flagship policy agenda.

In a new piece of research undertaken by planning and development consultancy Lichfields, entitled ‘Levelling up: the routes to growth,’ the practice takes stock and reflects on how local areas can prosper by maximising the opportunities laid out by government since the White Paper and ahead of the upcoming bill.

Lichfields Associate Director Edward Clarke, who led the research, explained the findings set out a framework to understand the best ways for local councils, combined authorities and metro mayors to effect change and drive economic growth in their local areas.

Edward added: “In setting out the need, opportunity and resources that different local areas have, we explore the geography of socio-economic needs, opportunities for growth and local structures and resources, to assess where levelling up policy might make the biggest impact and what are the critical success factors for local areas to deliver these outcomes.”

Government has been clear that increasing productivity and growing living standards in poorer performing places in priority areas including parts of the North and Midlands is fundamental to levelling up.

Local areas are asking how to capitalise on the 12 new ‘missions’ set out in the White Paper. Lichfields says these missions are largely a continuation of previous policies and have limited additional funding attached to them, beyond what has already been announced.

But Edward said: “It’s clear that the White Paper aims to effect meaningful change to the economic geography and prospects of the country, by setting out transformative systems and structures that target resources and priorities more effectively over the long-term.”

To better understand which areas might benefit from levelling up policies, Lichfields has formulated a broad index which measures each local authority in terms of (i) socio-economic needs, (ii) opportunity for investment, and (iii) resources needed to deliver change.

An area which has both significant socio-economic needs and the opportunities for investment might be viewed as a prime target for levelling up, but to capitalise on the opportunities such an area also needs the institutional resources to support delivery.

In the research, Clarke identifies five key themes that will influence chances of success:

A policy of focusing housebuilding in order to level up areas is not an alternative to also delivering homes in high demand areas.

Overall, the research highlights the important local drivers required if the levelling up policies, being brought forward by government, are to achieve their goals across the country.

A copy of the Levelling Up Insight report is available https://lichfields.uk/content/insights/levelling-up-the-routes-to-growth/