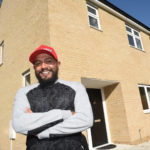 With Cambridge’s population predicted to increase to 150,000 by 2031, and private rents amongst the highest in the UK, Cambridge Investment Partnership is committed to building at least 500 new council homes by 2022 to ensure all residents have a range of housing options.

Akram Ali (35) grew up in the Arbury area of the City, with his parents and six brothers and sisters. His parents, originally from Bangladesh, bought their council home and continue to live there. In 2011 on a visit to Bangladesh Akram met his future wife, Tamanna (30) who was able to move to the UK in 2012 and the couple moved into his parents’ house.

Akram commented: “We were keen to start our family straight away and had our daughter Ayaath six years ago, followed by a son Ayaaz, now aged three and recently another son Alvi, now seven months old. My parents were happy us all living with them, but as our family grew larger, and all of us living in just one bedroom, we knew it was time to look at other options.

“I decided to go to the council to ask for some advice and they recommended going on the housing register for a new home. Initially we were a banding of B but with the arrival of our third child we moved to A.

“The Coronavirus then hit and we weren’t sure how this would affect us getting a home. Understandably there were some delays as we weren’t able to bid on properties but we kept looking until we could. As lockdown restrictions started to ease, we came across details of the new council homes being built at Wulfstan Way and were really interested so put a bid in. We couldn’t believe it when we were successful as it was only our second home to bid on.

“My wife and I fell in love with it straight away. The house has three bedrooms and we really liked the detached style, with just two other new homes in a small cul-de-sac. The quality of build is really good with big windows everywhere and inside it has been designed really well; you feel like a lot of thought has gone into the house, such as lots of plug sockets in really useful places.

“It’s also ideal for the children as there is an excellent primary school close by which my daughter is now attending and really loves —she’s already made 14 friends! It’s also a great location for me working at a local Indian restaurant on Victoria Road and my wife, who stays at home looking after the children, can easily walk to the school to pick up Ayaath.

“We feel very fortunate that our first tenancy is a brand new council home, and my parents are so happy for us. Its lovely to have some space to raise our young family.”

The homes are energy-efficient and include a number of sustainable features including photovoltaic solar panels, reduced water consumption and a reduction in carbon emissions.